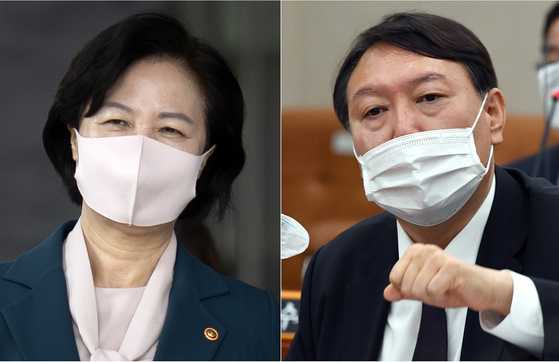 Choo ordered the ministry and the internal investigation headquarters of the Supreme Prosecutors’ Office to jointly work on an audit of the Seoul Central District Prosecutors’ Office’s probe into Optimus Asset Management. Yoon was the head of the office from May 2017 until July 2019, and the probe took place under his supervision.

In 2018, the Korea Communications Agency, which had major investments in Optimus products, asked the Seoul Central District Prosecutors’ Office to investigate the hedge fund’s operators on suspicions of embezzlement and fraud. In May 2019, the prosecution concluded there were no grounds for criminal charges.

In June, Optimus suspended withdrawals from its funds, freezing most customers’ money. Prosecutors launched a new probe into the private equity firm, which was entrusted with over 1.2 trillion won ($1 billion) from about 2,900 investors. In July, Optimus CEO Kim Jae-hyun and other executives were indicted for fraud and embezzlement.

“During the initial probe, the prosecutors didn’t even look into the financial transaction records of Optimus and cleared all suspects,” Choo said Tuesday.

“I want to check if Yoon, then head of the Seoul Central District Prosecutors’ Office, received briefings about how the case was investigated at the time,” Choo said.

It was the minister’s latest salvo in a war that continued ever since she took office in January. She has consistently questioned Yoon’s political neutrality and used her power last week to exclude him from some sensitive probes.

Rep. Park Ju-min of the DP said Tuesday that Yoon was acquainted with a lawyer who worked as Optimus’s advisor, implying that the probe could have been influenced by their personal relationship. Lee Gyu-cheol and Yoon worked together in an independent counsel probe against former President Park Geun-hye for abuse of powers, Rep. Park said.

A senior prosecutor who conducted the initial probe dismissed the suspicion that they deliberately went easy on the Optimus executives.

“The case was assigned to my department in October 2018. We cleared the suspects in May 2019 after our probe concluded that investments were made within the scope of the investment proposal and the agency suffered no financial loss,” he wrote.

The Korea Communications Agency, which is under the Ministry of Science and ICT, invested 106 billion won with Optimus from June 2017 through March 2018. It withdrew its investment after it became suspicious about the products. It recovered all its money, but the ministry still conducted a special audit and ordered the agency to ask the prosecution to launch an investigation.

Optimus had promise of high returns despite mainly investing in state-run companies. Actually it invested heavily in high-risk projects, such as private real estate firms and lenders, and gave fabricated reports to investors.

Kim Yu-cheol said the Korea Communications Agency, which requested the probe, was not particularly enthusiastic about demanding a criminal investigation of the hedge fund. The agency told the prosecutors that its internal investigation and the Financial Supervisory Service’s primary probe found nothing wrong about its investment, Kim said.

“It was, therefore, hard for the department to assign many prosecutors and investigators to aggressively go after the case,” he wrote.

Kim also refuted Choo’s criticism that his team did not track down financial transactions by the fund. “The agency gave an ambiguous statement to us, and there was no sufficient evidence,” he wrote. “There was a little possibility that we could get a warrant to track down the records.”

He also dismissed the suspicion that his team went easy on the case because of the personal relationship between Yoon and Lee. “I have never met or had a phone talk with Lee,” Kim wrote. “I have never briefed the head of the district office — Yoon — or his deputy about this case or received any order from them concerning the probe.”

Lee also told the JoongAng Ilbo that he has never contacted Kim.

Meanwhile, Yoon’s popularity is rising as a possible candidate in the next presidential election.

According to a survey conducted Sunday and Monday by polling company Rnsearch, Yoon was favored by 15.1 percent of respondents as the next president. Gyeonggi Gov. Lee Jae-myung was ranked the highest with 22.8 percent and DP Chairman Lee Nak-yon second with 21.6 percent.

During a National Assembly audit on the prosecution last week, Yoon left open the possibility of entering politics after his tenure ends next year.

The poll had a confidence level of 95 percent and the margin of error was plus or minus 3.1 percent. More details of the poll are available on the internet site of the National Election Survey Deliberation Commission.