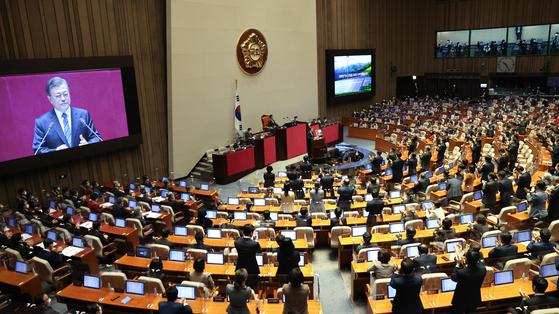 
The Secretary General of the United Nations (UN) welcomed President Moon Jae-in’s pledge to make Korea carbon neutral by 2050, in line with a concerted global effort to combat change.

António Guterres, the UN secretary-general, was “very encouraged” by Moon’s promise in a speech Wednesday to put the country on a course toward net-zero carbon emissions within the next three decades, said his spokesman, Stephane Dujarric, in a statement released Wednesday.

“This is a very positive step in the right direction after Korea’s exemplary Green New Deal which was announced in July,” the spokesman continued, adding the UN now looked forward to concrete policy measures from Seoul toward implementing its goal.

Unveiling the goal in his budget address for 2021 at the National Assembly, Moon pledged to commit around 8 trillion won ($7.1 billion) next year toward implementing the Green New Deal — an ambitious package of policies aimed at ending Korea’s dependence on fossil fuels with increased investments in renewable energy.

The pledges appeared to be in line with a plan drafted by the Ministry of the Environment’s 2050 Low-Carbon Society Vision Forum in February, which presented five different blueprints for getting the country to its 2050 target.

The most ambitious plan involved reducing emissions to around 180 million tons annually by 2050, compared to the 728 million tons Korea emitted in 2018. Under this plan, 93 percent of all automobiles on Korea’s roads would be electric or hydrogen powered, and only 5 percent of the country’s energy would come from coal plants.

Moon’s announcement on Wednesday follows similar recent pledges made by Japan and China to achieve carbon neutrality by 2050 and 2060, respectively.

The European Union has so far led the charge in committing to the 2015 Paris Climate Agreement, announcing last year it would introduce a legally binding climate law to reach net-zero carbon emissions by 2050.

The net-zero goal was also a prominent plank in the policy platform outlined by Korea’s ruling Democratic Party ahead of last April’s general election, and the party’s lawmakers last week ratified a resolution to respond to an impending climate crisis.

In particular, lawmakers pledged to cooperate with the government's goal of submitting detailed plans to reduce greenhouse gases by 2030 and to reach net-zero emissions by 2050 to the United Nations Framework Convention on Climate Change by the end of the year, as stipulated by the Paris agreement.

The Korean government’s resolve to follow the global trend appears strong. But its economy faces a difficult transition away from fossil fuel, with its manufacturing sector still heavily reliant on coal and oil.

Korea’s economy is the 11th largest in the world, but the country ranks seventh in terms of carbon emissions, according to the World Bank. And in terms of public investment in coal use, it ranks third behind China and Japan, which has led environmental organizations to label Seoul a climate villain.

Around 40 percent of Korea’s electricity relies on its 60 or so coal-fired power plants, four of which have been shut down under Moon’s climate agenda.

The president pledged in September, on the International Day of Clean Air for blue skies, that the country would close six more by the end of his term in 2022, and another 20 would be shuttered 2034.

Renewables, by contrast, only make up around 6 percent of Korea’s energy production.

In terms of specific carbon emission targets, the Environment Ministry’s own projections show that the country would need to reduce its emissions by 10 percent each year for the next three decades to reach carbon neutrality by 2050.

That's roughly the equivalent to the amount of carbon dioxide produced by the entire city of Seoul this year. Even with the economic crunch that accompanied the Covid-19 pandemic this year, carbon emissions worldwide only dropped by 8 percent.

A plan drafted by the Environment Ministry in 2018 set a target to reduce carbon emissions to 536 million tons by 2030, from a projected 850 million tons under a business-as-usual scenario.

Experts, however, stress that successfully pushing companies and the public to adjust requires specific plans to reduce emissions, rather than setting arbitrary goals.

Oh Jin-gyu, a researcher at the Korea Energy Economics Institute, said there has been little progress in reducing emissions, despite repeated goal-setting by the government because no policy roadmap was presented to accompany these targets.

Emissions trading, the system of selling permits that Korea has been using since 2015 to reduce emissions, “incurs a lot of administrative costs, and instead a flat carbon tax must be implemented,” Oh suggested.