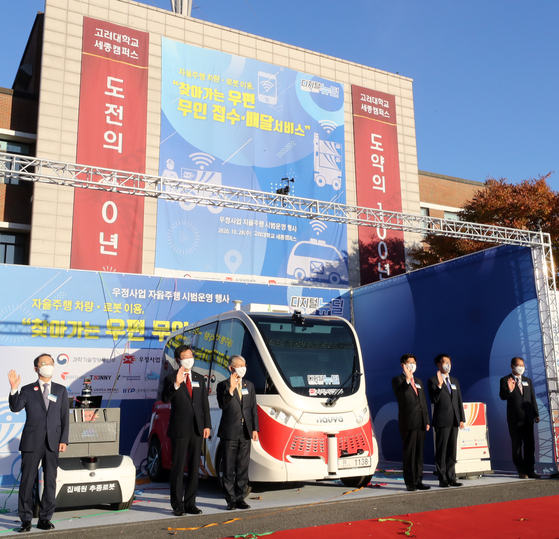 Participants in Korea Post's demonstration event on Wednesday are photographed at Korea University's Sejong Campus, where the event took place. The event showcased new high-tech postal service devices, such as an autonomous post office and an assistant delivery robot. [NEWS 1]


A small red and white bus stops in front of the student center at Korea University’s Sejong Campus on Wednesday.

The recipient of a package, who has already been notified by the Korea Post mobile app of the expected arrival time and verification code, enters the autonomous vehicle. She then punches the verification code on an input device and takes out her package from a container in the vehicle.

Soon afterwards, another student enters the vehicle and leaves her package. Before doing so, she has already plugged in the information for the recipient of the package on a mobile app. After scanning the barcode, she sticks the printed label on the package and puts it inside the container.

According to industry experts, integrating autonomous vehicles or robots in the postal business is a global trend.

“Due to the impact of the untact, or contactless, trend and development of technology, such as artificial intelligence, we have integrated autonomous vehicles and robots for creating a flexible environment,” said Choi Jung-ho, head of the logistics planning department at Korea Post.

When autonomous vehicles and robots are implemented, workload is expected to become lighter for the couriers, since they do not have to carry the heavy mail and travel long distances.

“Once the autonomous vehicles and untact postal services involving robots are implemented into our daily lives, there will not only be a huge improvement in customer convenience, but it will also help reduce the number of accidents experienced by the couriers,” Minister of Science and ICT Choi Ki-young said during the event for the trial.

It may take a while until the autonomous vehicle and robot technology for postal services are actually used by the public.

“The current law only allows commercial parcel delivery within the district designated for trial runs of the vehicles,” said Kang Kyung-pyo, head of the research center for cooperative automated driving at the Korea Transport Institute.