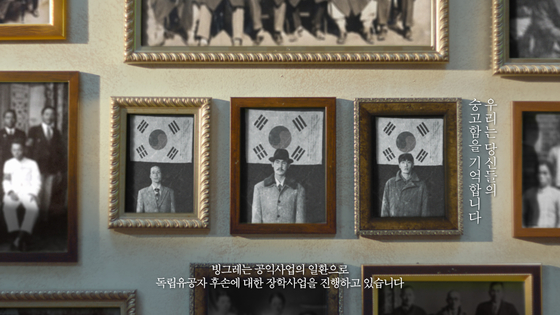 Binggrae is actively participating to provide scholarships to the descendants of independence fighters. [BINGGRAE]

Binggrae received an overall A grade for the second consecutive year in 2020’s ESG Evaluation.

ESG Evaluation is an assessment conducted by the Korea Corporate Governance Service since 2011, rating various companies’ non-financial characteristics such as environmental and social contribution and its governance structures. Around 900 stock market listed companies were evaluated this year. Binggrae marked B+, A+ and A on environment social and governance criteria, respectively, scoring an overall A grade.

The A+ grade on the social contribution criterion, which is a step up from last year’s grade A, can be seen as a milestone of Binggrae’s consistent endeavors on public welfare. Since 2001, Binggrae has actively participated in volunteer work with Korea Habitat. Binggrae has also hosted a drawing festival for children to foster participation in art-making for the past thirty years. The company’s scholarships for the descendants of Korean independence fighters since 2018 also reflects Binggrae’s great interest in social justice.

Binggrae’s historic awareness and its effort to commemorate Korea’s history comes from the company’s chairman, who married a granddaughter of Kim Gu, Korea’s statesman who led the independence movement in the early 20th century. The Korean Ministry of Patriots and Veterans Affairs awarded him for his efforts in establishing the Kim Gu Foundation and involvement in various efforts to support the descendants of independent fighters.

Apart from social contribution and welfare participation, Binggrae is doing its best to facilitate an amicable and prosperous relationship with its numerous partner companies. A collection development fund worth 10 billion won ($8.8 million) is operating in order to ensure the smooth management and monetary transaction between Binggrae and its partnering companies. In addition to financial interaction, Binggrae regularly holds formal meetings with its partnering companies to discuss each company’s hardships, in hopes of cementing the whole cooperation’s cohesion.

“This achievement of attaining an overall A grade in ESG Evaluation is a collective outcome of all our employees’ painstaking efforts. We will do our utmost to keep our newly attained A+ grade in social contribution field,” said an official from Binggrae.

No 'universe'? Good luck with your marketing!