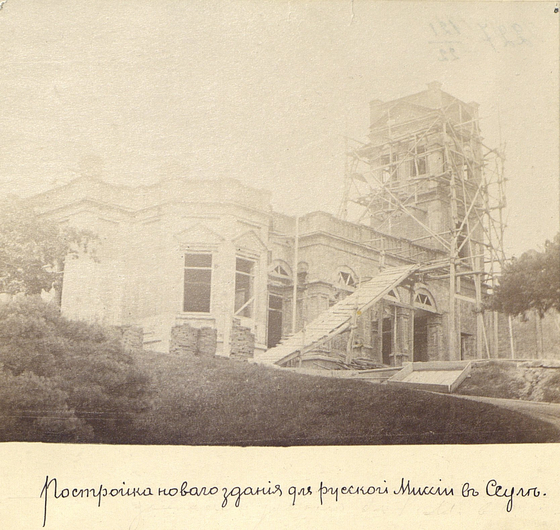 A photo of the Russian Legation under construction. [KUNSTKAMERA]

This “Russian man with a long name” resided in Korea for more than two decades, called “Salpajeong,” or “Salpajin,” by the people of Joseon, which was the pronunciation of his name written in Chinese characters.

Sabatin may have been fond of his Korean name, as historical records state that he referred to himself as “an architect of Joseon.”

In 1883, Sabatin first stepped foot on Joseon soil as a young 23-year-old, with no concept of the impact he would make on the modernization of architecture in Korea or the influence he would have on making Japan acknowledge the assassination of Empress Myeongseong, the wife of Emperor Gojong. 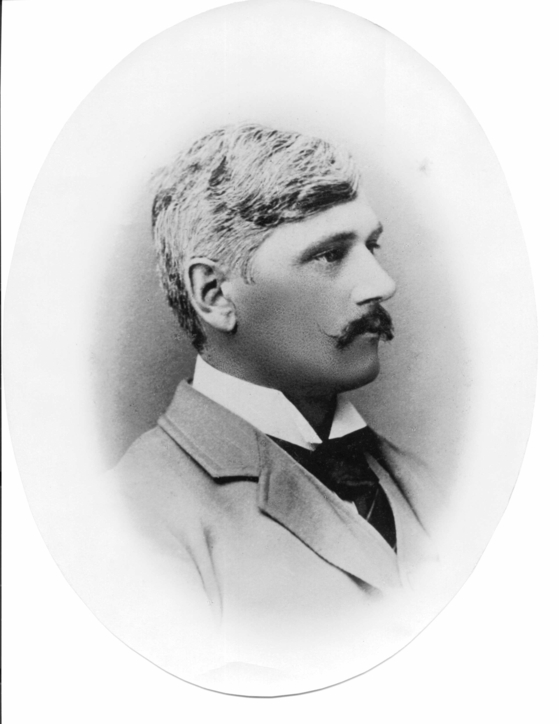 
For Koreans, Sabatin is better known as the key witness of Japan’s assassination of Korea’s last empress, in what is known as the Eulmi Incident of 1895, while his involvement in the emergence of modern Seoul remains relatively unfamiliar to Koreans and foreigners alike.

Celebrating the 30th anniversary of diplomatic ties between Seoul and Moscow, the Cultural Heritage Administration (CHA) and the Russian Embassy to Korea decided to shed light on Sabatin by organizing a special exhibition at the Jungmyeongjeon, a former royal library of the Deoksu Palace, located in Jeong-dong, central Seoul.

“Although diplomatic ties officially began 30 years ago, we believe that our friendship began since the 19th century when Joseon and Russia signed a mutual commerce treaty in 1884,” said Andrey Kulik, Russian ambassador to Korea. “Since then, the two countries have remained good neighbors and friends based on goodwill.”

Titled “The Life and Works of Russian Architect Afanasy Seredin-Sabatin,” the exhibition will stay open to public until Nov. 11 and is free of charge.

For most of the 20 years Sabatin lived in Korea, he worked as an engineer and an architect, though he did not possess any formal qualifications in either discipline. He is presumed to be the person behind the designs of some of the historically significant Western-style buildings in Seoul or, at least, participated in their construction, which include the old Russian Legation, Dongnimmun Gate, Gwanmungak (the King’s study), Jungmyeongjeon, Guseongheon, Dondeokjeon, Jeonggwangheon, the Sontag Hotel in Seoul as well as several buildings in Incheon such as the Chemulpo (now Incheon) Club and the Russian Consulate. 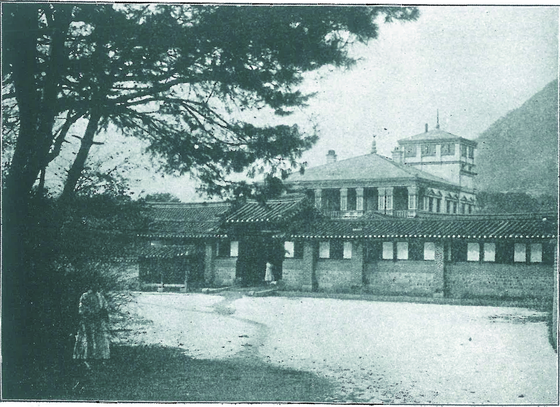 A photograph showing Gwanmungak, the King's study inside Gyeongbok Palace, which was Korea's first Western-style building designed by Sabatin. It no longer exists as it was demolished by the Japanese in 1915. [JOONGANG PHOTO]


According to CHA, about 12 Western-style buildings are presumed to be works of Sabatin.

“Only two buildings, the old Russian Legation and Gwanmungak are confirmed to be Sabatin’s works,” said Lee Jung-soo, a researcher of CHA who curated the exhibit. “As for the other 10 buildings, many researchers believe they are works of Sabatin, but there is a lack of historical materials to prove that.”

Being the architect behind the old Russian Legation, according to Lee, is already enough to shed light on this young Russian man.

Then-Russian consul Karl Ivanovich Webber recommended Sabatin for the construction of the legation building saying that “this young man built a beautiful two-story building for the King of Joseon inside the palace. Although he is not an architect, he is an industrious and decent man who learned the knowledge necessary for architecture through self-study.”

According to Korean history professor Simbirtseva Tatiana Mikhailovna at State Academic University for the Humanities in Moscow, who has been extensively researching Sabatin, the Russian Legation had a good mix of Western and traditional styles as the façade looked European while the setting of some of the rooms were very Asian.

By citing I.P. Azbelev, a Russian traveler who visited the legation presumably in 1894, Mikhailovna stated in her research paper that “the décor of its bedrooms and dining rooms was European but the reception rooms were furnished in the Oriental style.”

“The legation building is significant as it was not only the first modern public building and the first VIP-class mansion in Seoul, but also the building where Emperor Gojong took his desperate refuge,” said Lee.

On the morning of Feb. 11, 1896, before sunrise, the emperor and the crown prince took about a one-kilometer journey from Gyeongbok Palace, past Deoksu Palace (then known as Gyeongun Palace) and arrived at the Russian Legation. The king’s bid for asylum is referred to as the “Agwan Pacheon” today. Though it’s remembered as a humiliating incident, part of the king’s escape route, known as the King’s Road, was restored two years ago. In the Russian Legation, Gojong and the crown prince resided for about a year.

Lee recommends visitors to take a walk through the King’s Road to arrive at Jungmyeongjeon to enjoy the exhibit, and check out the Russian Legation after the exhibit, although only the tower of the building has survived today after being destroyed during the Korean War (1950-53).


As visitors enter the exhibition hall inside Jungmyeongjeon, they can hear impatient chants in Japanese looking for Empress Myeongseong. It was this noise that Sabatin woke up to at dawn on Oct. 8, 1895, who at the time was working as a guard inside Gyeongbok Palace. 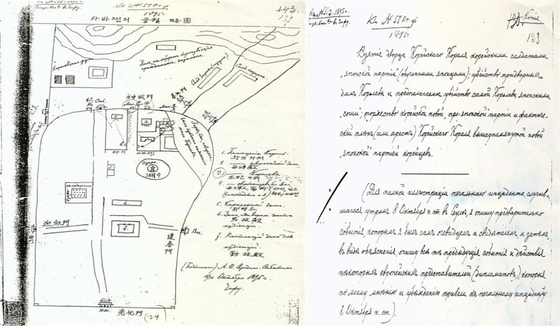 Left: a hand-drawn map of Gyeongbok Palace by Sabatin used to describe what had happened on the morning of the assassination of Empress Myeongseong. Right: Sabatin's written testimony of the incident that played a critical role in making Japan take responsibility for the empress's assassination. [RUSSIAN FOREIGN POLICY ARCHIVE]


According to Lee, Emperor Gojong was so anxious that he appointed American Colonel William McEntyre Dye (1831-99) and Sabatin as leaders of the Korean soldiers who were guarding the palace against Japanese forces.

“We can see how anxious the emperor was to appoint his good architect friend Sabatin as a palace guard,” said Lee. Since September of 1894, Sabatin had worked inside the palace guarding it during the night from 7 p.m. to the next morning, Lee added.

According to his written testimonies, Sabatin was on sentry duty at the palace at the time and was a witness to what had happened that morning.

He wrote that about four to five Japanese assassins pulled out their swords and that one of them who was carrying a long sword and holding onto a dagger was leading the others. About 20 to 25 assassins broke into Gonnyeonghap (the residence of Empress Myeongseong) and searched for the empress.

As he was watching the event from afar, Sabatin was approached by the assassins, who yelled at him to confess the whereabouts of the queen. He told them he has no idea, managed to get out of the palace and report what he had seen to Karl Ivanovich Weber, the first Russian envoy to Korea.

“As Sabatin did not admit that he witnessed the crucial moment of the assassination of the empress, Weber began to have doubts in Sabatin,” said Lee. “But according to research papers by the Northeast Asia Research Institute, it is certain that Sabatin had witnessed the assassination. But if he did admit it, he would’ve been killed.” 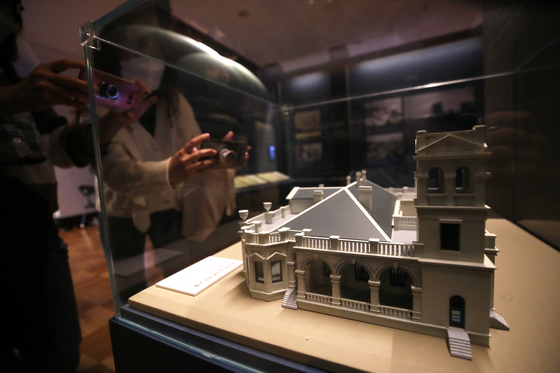 Models of 12 buildings presumed to be built by Sabatin, or whose construction he participated in, are on display at the special exhibition at Jungmyeongjeon in central Seoul. [YONHAP]


“We literally rummaged through historical records to organize this exhibition, hoping to gather together as much information as possible to let Koreans learn about Sabatin and his great works,” said Lee.

The exhibition runs through Nov. 11. Online viewings of some corners of the exhibit are also available at CHA's official YouTube channel.