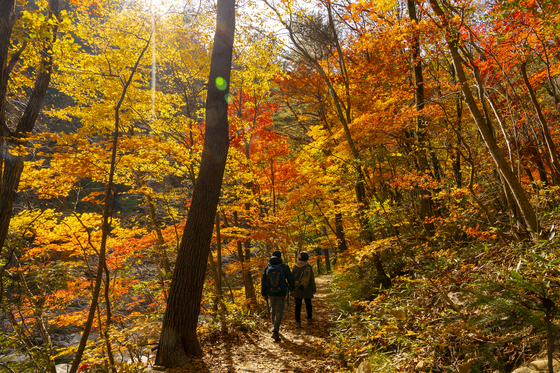 
Now is the ideal time to hit the hiking trails as the mountains are offering perfect fall foliage, and Odaesan National Park in Gangwon offers some of the best fall colors in the country.

Due to a series of heavy rains and late heat in the summer, many were expecting red leaves to be less brilliant. But mountains known for boasting fall colors in Korea such as Mount Odae and Mount Seorak are doing better than expected, attracting a parade for leaf-lookers.

While cherry blossoms that signal spring start blooming from the sunny fields of the south, fall colors spread from the mountains of the north. As the colors progress from the upper elevations of mountains in Gangwon, Mount Odae is already fully dressed in shades of autumn.

Mount Odae is a famous autumn foliage spot that attracts big crowds every year at this time. The view of Mount Odae at the Birobong peak at Odaesan National Park is especially beautiful, and the Seonjae Trail is one of the best for foliage in Korea.

Even though about 3.6 kilometers (2.2 miles) of the mountain trail from Sangwon Temple to Dongpigol Valley has been closed due to typhoon damage this summer, more than 10,000 tourists are visiting the mountain every weekend. 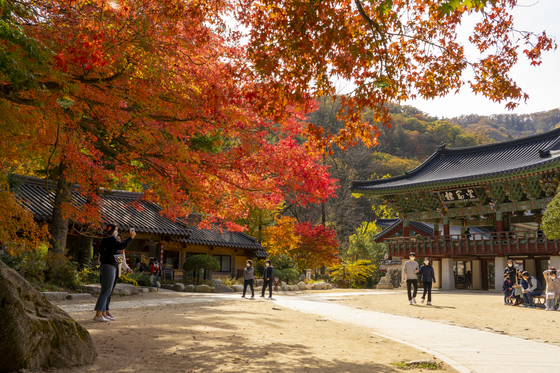 Among the many trails available in Odaesan National Park, Seonjae Trail which connects Woljeong and Sangwon temples, is the most popular. The 9.4-kilometer trail is approximately a three-hour walk on a well-groomed path. To get to the Seonjae Trail, it is recommended to start from the main gate of Woljeong Temple near the park’s ticket office and pass through the fir tree forest. Also featured in tvN’s drama series “Goblin” (2016), the one-kilometer-long fir tree forest welcomes visitors with a beautiful path flanked with some 1,700 fir trees standing 40 meters (131 feet) high, closely packed together. The trees near Sacheonwangmun and Geumganglu in Woljeong Temple are known to be exceptionally colorful.

"The forest is planted with all kinds of species of trees,” Kim Jae-bu, a tour guide at Odaesan National Park, said. “That’s what makes Mount Odae more beautiful — various species of trees growing in the forest offer just about every imaginable color combination.”

A sign that reads "Enlightenment, a thousand-year-old trail that cures" (translated) signals the start of the Seonjae Trail. Before a new road was built at the end of the 1960s, the trail was used by Buddhists to get from Woljeong Temple to Sangwon Temple. It was called the thousand-year-old trail until the Korea National Park Service and Woljeong Temple restored the old trail and officially named it Seonjae Trail in 2013. The trail is named after a young monk named Seonjae who appeared in the Avatamsaka Sutra, one of the most influential texts of East Asian Buddhism.

One of the charms of this trail is that it is relatively flat, which allows visitors to enjoy the autumn leaves without having to stress about walking up a steep slope. There are plenty of resting spots on the way, including large rocks by the mountain valley where you can enjoy the sounds of the mountain stream while surround by the autumn trees.

The upper stream of Odae Stream that reflects the blue sky and red leaves not only serves as beautiful scenery but also has historical significance as it is where the natural resource exploitation of the Japanese took place during the Japanese colonial period from 1910 to 1945. The trees that were cut off from Mount Odae were floated on the stream to the Han River. 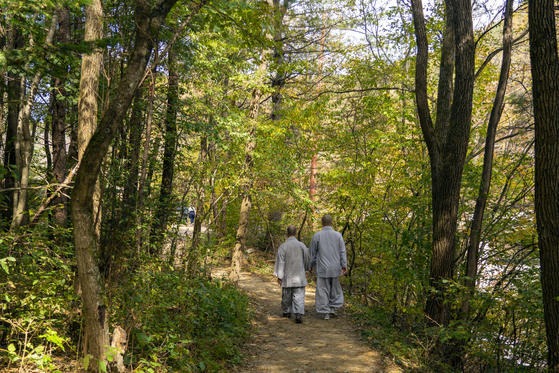 Seonjae Trail ends at Sangwon Temple, but here is also where another trail begins — a track to Birobong, one of the five highest peaks of Mount Odae that reaches 1,563 meters at the summit.

This path is more popular among Buddhists than mountain climbers because the trail leads to Sangwon Temple’s annex temple Jeokmyeolbogung (Treasure No. 1,995). It is one of the five Jeokmyeolbogung in Korea that refers to a place of worship that holds the Sakayamuni Buddha’s sarira, or relic. 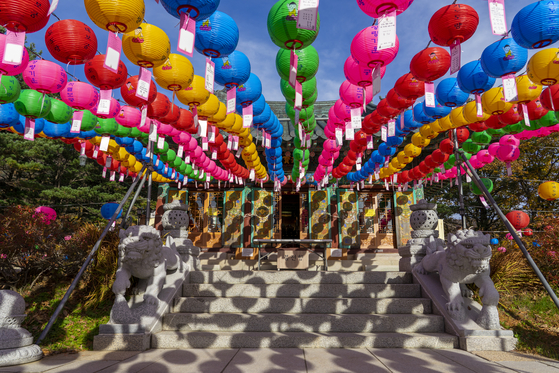 In Buddhist terms, "Jeokmyeol" refers to the disappearance of agony. It is recorded in "The History of the Three Kingdoms" that the sarira was brought by monk Jajang (590-658) returning from Tang China who enshrined parts of Buddha’s sarira on the way to Birobong Peak.

To Jeokmyeolbogung requires a 1.7-kilometer walk uphill from Sangwon Temple, which is well-groomed with stairs and cut stones. After walking up the stairs for 30 minutes toward the peak, you will come across another annex temple of Sangwon Temple, Sajaam, in which five buildings were constructed on a slope to create a tier-like structure. The structure tucked deep in the woods appears as if it is floating about the tree tops. 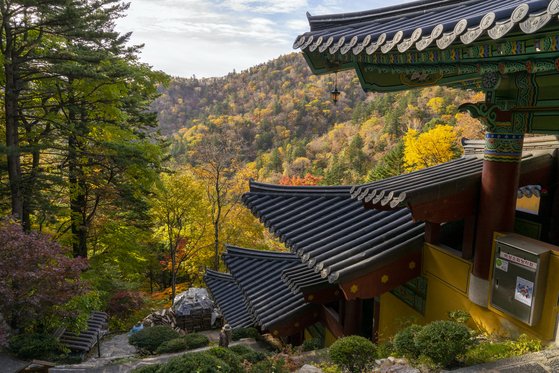 Sajaam, an annex temple of Sangwon Temple, is built on a slope to create a tier-like structure and is surrounded by vibrant autumn colors. [BAEK JONG-HYUN]

From Sajaam, just another 10-minute walk takes you to Jeokmyeolbogung. While a long queue of mountain climbers line Seonjae Trail, the pilgrim’s road is quiet and peaceful.

Despite its significance as a Treasure, Jeokmyeolbogung keeps its modesty with a small shrine and a sarira pagoda. The shrine is filled with lanterns holding visitors’ wishes, as well as the Sakayamuni Buddha’s sarira.

For those looking for an activity to uplift their spirits this fall, walking in a dense forest covered in autumn colors may soothe the mind. While perhaps not the most spectacular views, Jeokmyeolbogung and Sajaam present peaceful scenery that leaves a deep impression in troubled times.