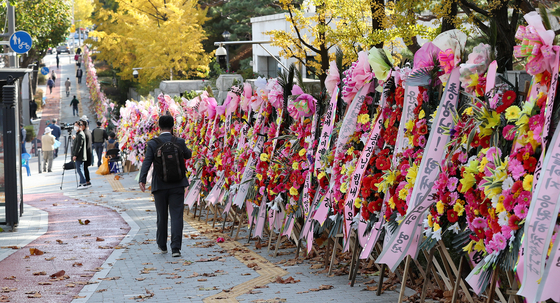 
The term “wreath” refers to a ring-shaped object of real or fake flowers used to express congratulations or condolences. Wreaths have different meanings in different cultures. In the West, they are hung up in front of the door or on the wall around Christmas time to dispel evil spirits. A three-tiered wreath is a unique item only found in Korea, though. The three-tiered wreath is about two meters (6.6 feet) high. As the symbolic meaning of wealth and power was added, it became taller than a person.

The price of a wreath is set regardless of the rate of inflation. You can get a three-tiered wreath at around 100,000 won ($88). Last year, 3.88 million flower wreaths of condolence and 2.02 million congratulatory wreaths were circulated in Korea. With one million more for special events, a total of 6.9 million wreaths were consumed in Korea, according to Dankuk University’s study on revising the wreath circulation system. Each condolence wreath requires about 100 chrysanthemums, and a congratulatory wreath needs 65 daisies. The total number of flowers used in wreaths adds up to more than the total number of flowers grown in Korea, showing the flowers were recycled. As of last year, 73.7 percent of congratulatory wreaths and 49.1 percent of condolence wreaths are estimated to have used recycled flowers.

As the reuse of flowers increases, the government has enforced the Flower Industry Act, which requires the labeling of recycled flower wreaths. That’s why more wreaths use fake flowers rather than real ones.

Flower wreaths accumulated one-by-one in front of the Supreme Prosecutors’ Office in Seocho District, southern Seoul, now number more than 300. The wreaths have phrases embedded onto them cheering on Prosecutor General Yoon Seok-youl as he battles with Justice Minister Choo Mi-ae to secure independence for the prosecution.

The wreaths began increasing after the National Assembly’s regular audit of the Supreme Prosecutors’ Office. Wreaths also started to pile up in front of the Board of Audit and Inspection after the government watchdog released a report finding fault with the Industry and Energy Ministry’s economic efficiency report on the Wolseong-1 nuclear reactor. The flower farmers struggling as a result of cancelled events due to the Covid-19 pandemic enjoyed an increase in business.

Language changes over time. Now, the dictionary definition of wreath should be changed to an “expression of congratulation, condolence or support.” It’s clear that I am experiencing a country that I hadn’t experienced before in any way.

The sword is blunted