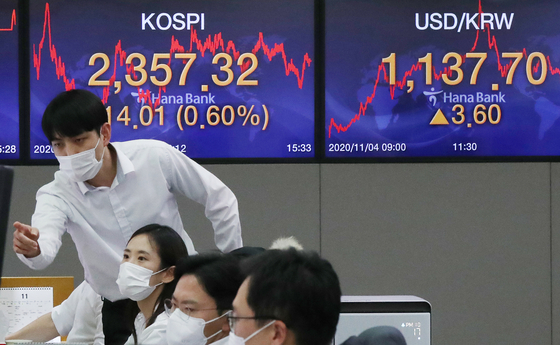 A screen shows the closing figure for the Kospi in a trading room in Hana Bank in Jung District, central Seoul, on Wednesday. [NEWS 1]


Shares closed higher Wednesday as investors kept a watchful eye on the ongoing vote count of the U.S. presidential election. The won fell against the dollar.

As vote counting for the U.S. election progressed, the local market swung between negative and positive terrain early in the session before gathering ground.

Some analysts have said stock markets favor a win by Democratic nominee Joe Biden, as it could give weight to the Democratic Party's push for a large stimulus deal, which has stalled amid differences with the White House.

Others noted that investors expect a stimulus deal to go through regardless of the election result.

The local currency closed at 1,137.7 won per dollar, up 3.6 won from the previous session's close.