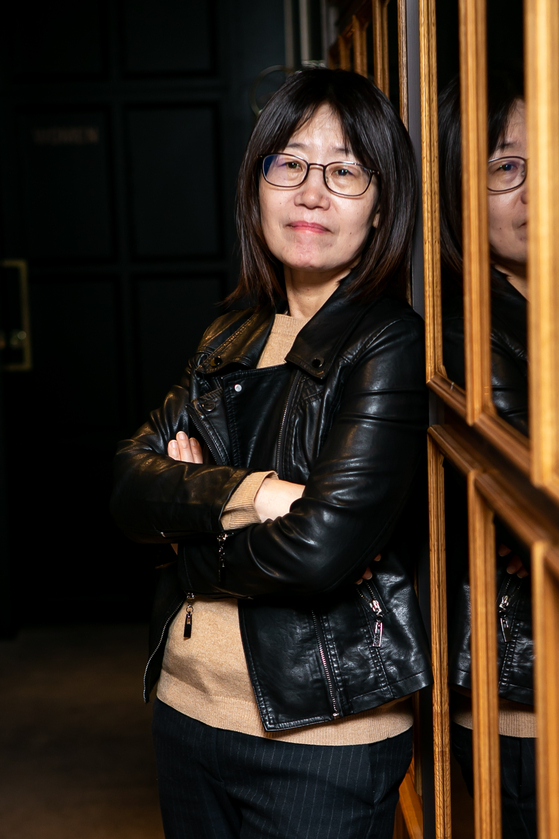 
Joon is a 19-year-old intern working at a call center which is tasked with calling people who owe money and demanding they pay up.

He begins to wear diapers because of how demanding the job is.

One evening, he ends up visiting someone who owes money in person to try and demand payment. He goes missing, and is subsequently discovered dead.

His boss Se-yeon, who is wrapped up with dodging responsibilities, and her daughter Mi-rae, are swept into the case.

“Light for the Youth,” directed by Shin Su-won and released on Oct. 28, is a film that purposefully focuses on social issues the younger generation is tackling today.

Shin has consistently created films on the dark side of society. Her stories are based on reality that are simulated through a dramatic plot which amplifies the storyline and rams it into the minds of the audience.

Her first feature film “Pluto” (2013) criticizes the overly competitive atmosphere of Korea's educational system through the death of a straight-A student in a prestigious high school. It received a special mention in the Generation 14plus section at the 63rd Berlin International Film Festival. Her 2015 film “Madonna” depicts the life of a pregnant woman who became homeless, without any support from her friends or family. The film was invited to screen at the Un Certain Regard section at the 68th Cannes Film Festival.

The inspiration behind “Light for the Youth” came from the tragic news of the death of a worker at a maintenance service company in 2016, known only by his surname, Kim. Kim, who was just 20 at the time, had been working for the company for just seven months when he was hit and killed by a train while working alone to fix a door at Guui Station in eastern Seoul.

“When I saw that news I was reminded of the students of the Sewol Ferry two years ago,” Shin said in a recent interview with the JoongAng Ilbo, an affiliate of the Korea JoongAng Daily, at a cafe in Samcheong-dong, central Seoul. “From the Sewol Ferry incident, and again at the candlelight protest in Gwanghwamun Square, and again through the post-it note memorial at Guui Station, I saw the outrage and sadness of the youth in their teens and 20s living in ‘Hell Joseon.’”

“Hell Joseon” is a satirical Korean term invented by the younger generation that compares living in Korea to a “living hell.”

Before she turned to filmmaking, Shin spent 10 years as a middle school teacher, which may be the reason that she is able to sympathize so much with the youth of today.

“Our country’s generations are divided by the IMF financial crisis,” Shin evaluates. “At least for the 586 generation [another local term for the generation who are now in their 50s, that were born in the '60s and who went to college in the '80s], even though they were born poor, they had the chance to improve their status if they were smart. But for the generation raised after the IMF—in other words, those now in their 20s and 30s—that opportunity has been taken away.”

Shin gave an example from her own decade-long teaching experience to back up her analysis.

“When I was a teacher, only about five students in the class had their eyes open and the rest of them were sleeping,” she said. “[I heard] that now, even students in elementary school have already given up on subjects like mathematics and English. Even if those children grow up, go to college, in this system where everything is blocked, even the tiniest bit of self-esteem crumbles.

“When I hear stories from the younger generation, I feel that they have so much rage, but there is no specific target,” Shin said. “While I was preparing for this film I met many youths looking for employment. Even if they had graduated from a four-year university course, they don’t even get a chance to be interviewed. They said that in this competitive cycle of employment, they feel very insignificant, unneeded, like a piece of trash.”

Shin didn’t have to look far to hear such stories. One day while she was still struggling with her script at a cafe in Noryangjin-dong, southern Seoul, she heard a group of young people talking at the table next to her.

“The scriptwriting wasn’t going as smoothly as I planned so I picked up my laptop and was sitting at a cafe, and I heard these youths holding a study session,” Shin said. “They were preparing for the civil service examination and they were using all these expert words that I couldn’t understand, and discussing how they would answer for the interview, but I felt like they were locked up somewhere.”

The director chose the call center because of an incident in 2017 when a 19-year-old intern working at a call center committed suicide due to being overworked. She then began to actively research about the poor working environments of call centers.

“In some places it is really like a chicken coop,” Shin said. “This year there was a cluster of Covid-19 infections from a call center. It couldn’t be helped. Even though it’s a white-collar job, it’s a job that leaves you drained while your dignity is thrown to the bottom of the pit. [The workers said] that they feel mortified when they have to ask permission even to go to the toilet. I think that call centers represent the inhumane labor environment [of this society].” 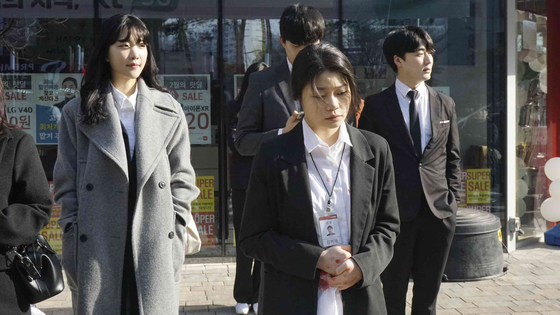 Actors Yoon chan-young, pictured in the top, and Jeong Ha-dam, above, portray Joon and Se-yeon’s daughter Mi-rae, who represent the youths in this era today. Whether they are employed or not, each suffer from the harsh realities of Korean society. [LITTLE BIG PICTURES]


The reason that Shin chose Se-yeon, a working mom in her 40s, as the main protagonist was due to her own age group.

“Since I’m from the older generation, I thought it would be deceitful if I fronted a protagonist in their 20s,” she said. “I heard from a friend who works at a call center that even experienced workers—they only have temporary contracts and their working rights haven’t improved much.”

Through Se-yeon and her daughter Mi-rae, the director also depicts the lack of empathy and interaction between the two generations.

“The rage of the youths seems to be directed at the conservative elders, or kkondaes,” she said. Kkondae is a Korean slang term used to describe a condescending person who forces their ideologies and experiences on others.

In the film, when Se-yeon confronts her daughter about employment, she snaps back at her mother, “You know what’s the scariest thing of all? No matter how much I try, I’m going to become like you.”

The Korean film title directly translates to “a sunny spot for the youth,” using irony to point out the desperate situation that the youths are actually in. Shin chose the name herself. But the director said she likes the English title better, and went on to explain the film’s ending.

“Maybe what Se-yeon does at the end could feel like a fantasy, a lie,” she said. “The world isn’t going to change because of her choices. While I was filming the scene, I wondered what I would do in her shoes, and I had thought about a gloomier ending. But I didn’t want that. The final version of the ending came to me right before the filming of that scene. [No matter how much it looks like a fantasy] I think that it offers a thin ray of hope [for the youths].”