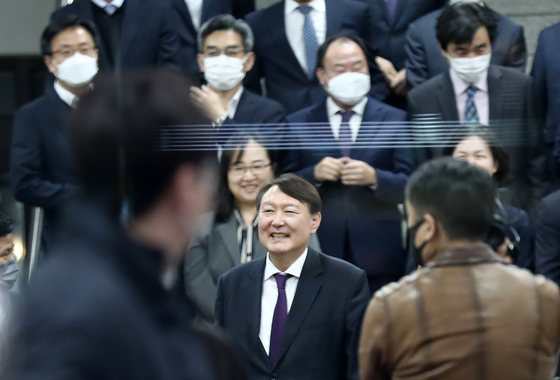 Prosecutor General Yoon Seok-youl, center of the first row, smiles during his visit to the Daejeon District Prosecutors' Office on Oct. 29, 2020. Yoon resumed his tour of regional prosecution offices after eight months. [YONHAP]


Dissident Prosecutor General Yoon Seok-youl has gained public support as a possible presidential candidate, and he's drawing rebukes from politicians from both sides of the aisle.

“I don’t agree with his entry to the political arena,” said Rep. Joo Ho-young, floor leader of the opposition People Power Party (PPP), on Wednesday in an interview with MBC Radio.

“Politics is a comprehensive art, and it requires a high level of experience and knowledge [...] We’ve seen many cases in which outsiders with great abilities lost their accomplishments after starting political careers. Politics requires training, and I don’t agree with a sudden political career for him.”

Joo also said it's an inappropriate time to discuss a political future for Yoon, who is serving a post that requires political neutrality.

“He has freedom to choose his path after his term, but I don’t think [politics] is the right choice for him,” Joo said.

Until now, the PPP has been supportive of Yoon, who has confronted the ruling party and the administration, particularly Justice Minister Choo Mi-ae, and didn't hesitate to order investigations into President Moon Jae-in’s associates. The conservative opposition party and its allies, however, have started to express discomfort as Yoon’s popularity quickly outstripped theirs in the latest opinion poll.

According to the Realmeter poll announced on Monday, Chairman Lee Nak-yon of the ruling Democratic Party (DP) and Gyeonggi Gov. Lee Jae-myung, also a DP member, were ranked as co-leaders, each scoring 21.5 percent.

Yoon was ranked third with 17.2 percent, up 6.7 percentage points from the previous month's record. His popularity is the highest among all possible candidates outside the DP. 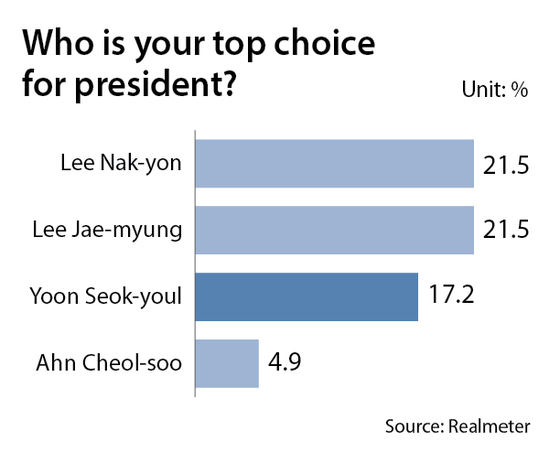 People’s Party Chairman Ahn Cheol-soo was a distant fourth with 4.9 percent. Independent Rep. Hong Joon-pyo scored 4.7 percent. Both Ahn and Hong were defeated by Moon in the 2017 presidential election.

The dissident prosecutor general’s popularity was seemingly boosted by his remarks during the National Assembly’s audit last month. At the end of the audit session on Oct. 23, Yoon left open the possibility of entering politics after his tenure ends next year. Appointed by President Moon as prosecutor general in July 2019, Yoon will complete his two-year tenure in July 2021. The next presidential election takes place in May 2022.

Disturbed by Yoon’s rapid political rise, PPP lawmakers argued the party leadership must stop efforts to find outside candidates for next year’s Seoul and Busan mayoral by-elections and the 2022 presidential race.

“Outsiders have no affection for the party,” Rep. Park Wan-su of the PPP wrote in a Facebook post on Wednesday. “Talented politicians who devoted their careers to the party for a long time must be respected more.”

Rep. Hong, who finished the 2017 presidential race in second place as the nominee from the Liberty Korea Party, the predecessor of the PPP, said last month that Yoon is unfit to represent the conservative opposition.

Hong said the conservatives must not forget that Yoon became the prosecutor general by leading investigations into former President Park Geun-hye and her allies. He said the PPP must not make a mistake of considering Yoon its ally based on the belief that “the enemy of my enemy is my friend.”

Yoon revealed during a parliamentary audit in 2013 that his probe into illegal meddling by the National Intelligence Service in the 2012 presidential election to help Park’s victory was interfered with by his superiors. For the next several years, Yoon was assigned to minor posts outside Seoul in a series of demotions.

But he returned to the spotlight in December 2016, when he was asked to join an independent counsel team that investigated Park. Shortly after Moon took office in May 2017, the new liberal president handpicked Yoon to head the Seoul Central District Prosecutors’ Office. Two years later, Moon promoted Yoon as the prosecutor general.

“He is rising as a political star in the opposition because he is visibly resisting the current administration,” Ahn said in an interview with the JoongAng Ilbo on Wednesday. “But this is temporary. If he has presidential ambitions, he must prepare his vision and invest in his abilities. He must prove his ability to strongly hold onto his supporters.”

Sources from the conservative opposition parties admitted that Yoon was absorbing their supporters. Among those supporting the PPP, Yoon was backed by 38.8 percent, while Hong, Ahn and other presidential contenders each polled at single-digit figures.

“The party showed support for Yoon because he has confronted the administration," a PPP official said. “I am worried that the strategy has weakened the competitiveness of our politicians. If this situation continues, the party will end up with a failed strategy and lose its competitiveness.”

The administration also expressed displeasure that the top prosecutor was being considered as a strong presidential contender of the opposition. Presidential Chief of Staff Noh Young-min said Wednesday that it is undesirable that Yoon’s political popularity is rising steeply.

“Yoon must feel uncomfortable about the situation that he is being talked about as a presidential candidate of the opposition, although he is an incumbent prosecutor general,” Noh said during the National Assembly’s audit on the Blue House.

“Yoon had made a public request [to pollsters] to leave him out of the opinion polls, but they continue to include him in the surveys,” Noh added.
On Tuesday, Justice Minister Choo issued her latest condemnation of Yoon.

“It is an extremely grave matter that the prosecutor general’s remarks and behaviors are actually ruining the prosecution’s political neutrality and the people’s trust in the prosecution,” Choo said.

Hours later, Yoon issued a counterattack. In a leadership training of 30 senior prosecutors on Tuesday afternoon, Yoon said the prosecutorial reform’s goal should be making the prosecution a fair and equal law enforcer.

“The people want a prosecution that can conduct a fair investigation into the incumbent administration, and that can protect the weak in our society,” Yoon said. 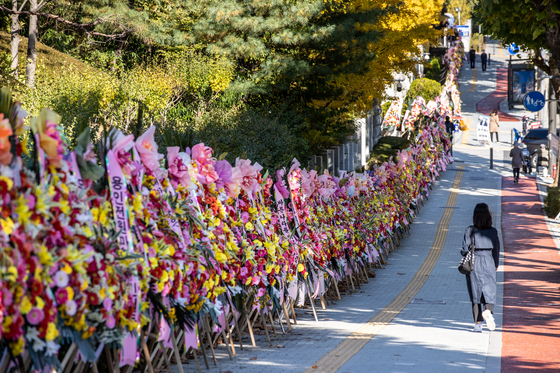 Flower wreathes sent by the people who support Prosecutor General Yoon Seok-youl stand along the pedestrian walkway in front of the Supreme Prosecutors' Office in Seocho District of southern Seoul on Oct. 29. Conservative civic groups who sent the majority of flowers removed them on Monday as controversy about Yoon's political future grew. [YONHAP] 〉


Meanwhile, conservative groups on Monday removed about 350 standing flower wreathes they had sent over the past weeks to the Supreme Prosecutors’ Office to support Yoon. The flowers were sent to support Yoon since Oct. 19 but the prosecution and the Seocho District Office recently asked the civic groups to remove them.

PPP's Yoon became a conservative by fighting a liberal president