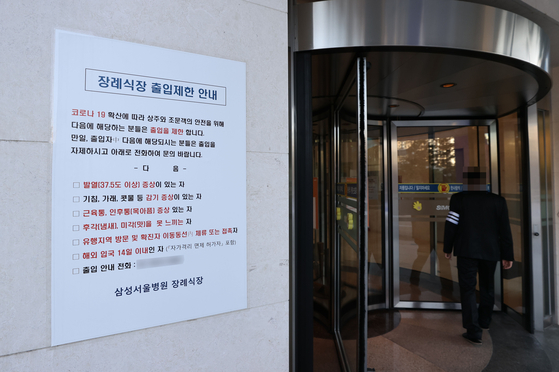 A sign limiting entry is posted at the entrance to the funeral hall at Samsung Medical Center in Gangnam District, southern Seoul, Wednesday after a reporter who covered the funeral of late Samsung Electronics Chairman Lee Kun-hee last week tested coronavirus positive. [YONHAP]

A reporter who covered the funeral of late Samsung Electronics Chairman Lee Kun-hee last week at the Samsung Medical Center in southern Seoul was confirmed Covid-19 positive Wednesday, prompting multiple political and economic leaders who visited the mourning altar to get tested.

The Central Disease Control Headquarters on Wednesday morning requested people who visited the first floor lobby of the funeral hall at the Samsung Medical Center in Gangnam District on Oct. 26 to get tested for Covid-19. There had been no additional confirmed cases related to the funeral as of Wednesday.

The reporter, who attended the funeral at the hospital on Oct. 26, began developing coronavirus symptoms the following day and was confirmed positive Monday, according to health authorities. Officials say that the reporter could have been contagious from Oct. 25, two days before symptoms started developing.

However, two people who dined with the reporter on Oct. 27 have tested negative.

Despite the hospital's funeral hall limiting attendance to less than 50 people and requiring QR code check-ins, health authorities estimate that over 1,000 people visited the center, including prominent politicians, senior government officials, business leaders and other celebrities. The lobby and entrance of the hall was crowded with reporters and cameramen covering the funeral after Lee died on Oct. 25.

Consequently, a number of politicians and government leaders rushed to get tested Wednesday, many canceling activities while awaiting results. 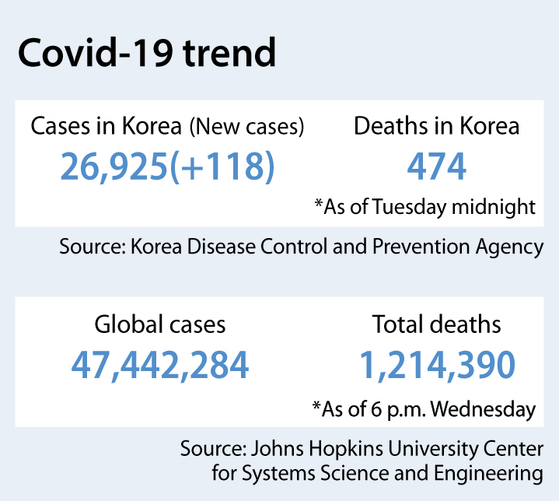 Of the new cases, 98 were local infections and 20 were imported. The Seoul metropolitan area accounted for 84, or 85.7 percent, of domestic cases. Seoul had 39 new cases, Gyeonggi had 41 and Incheon had four.

This marked a spike from the 75 new cases the previous day and a return to triple digits after four days with less than 100 new cases.

Nursing homes, hospitals, small gatherings and transmissions between family members continue to be sources of infection.

The country still is monitoring for possible clusters emerging from Halloween celebrations last weekend, when crowds of young people visited bars and parties despite being warned against doing so by the government.

The South Gyeongsang Provincial Government said Wednesday that a teenage high school boy from Changwon was confirmed Covid-19 positive the previous day, infecting his entire family of five, including parents and two sisters in their 20s and teens. The boy went to school Tuesday but was sent home early after he was found to have a fever. He got tested soon after at a local clinic and was confirmed positive, and the rest of his family was found to be infected the following morning.

The boy's family members were found to have made contact with hundreds of people. The daughter is a university student in Changwon and one parent continued going to the office. Local health authorities are in the process of contacting about 600 colleagues. The university shut down for a week and reverted to online classes.