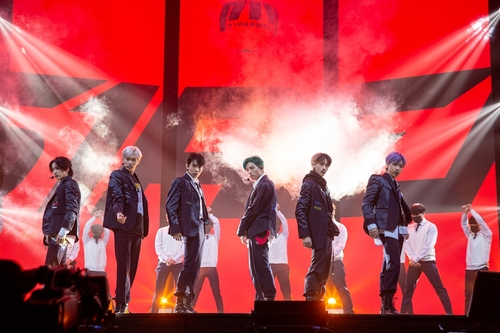 
An abbreviated version of a film starring the rookie boy band P1Harmony will be streamed on Amazon Music in the United States on Nov. 7, the band’s agency FNC Entertainment announced Thursday.

Directed by Yoon Hong-seung, "P1H: The Beginning of a New World” tells the origin story of the group and establishes a kind of universe, as is done in Marvel and DC superhero movies. The plot revolves around the six members saving the world from a virus. It premiered in local theaters on Oct. 8.

The 99-minute film will be streamed on Amazon Music in an abbreviated 20-minute version.

"The demand for Korean products is increasing in the global e-commerce market, and consuming media content online is emerging as a trend," the agency said. “This ongoing trend makes the meeting between P1Harmony and Amazon more meaningful."

Versions of the film in various lengths are being screened overseas, including on Yahoo Japan’s online video service GYAO, China's largest video platform Tencent, and JOOX, the largest music and video streaming service in Southeast Asia.

P1Harmony is FNC Entertainment’s first boy band to debut in four years. After "P1H: The Beginning of a New World” hit local cinemas on Oct. 8, the band officially launched its debut EP “Disharmony: Stand Out,” which relates to the plot of the film.