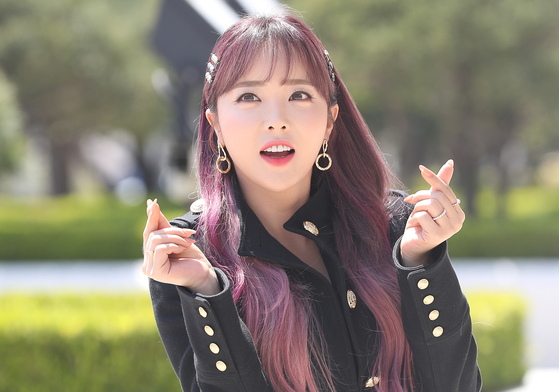 
Trot singer Hong Jin-young has been embroiled in plagiarism rumors related to her master's dissertation paper which she wrote 11 years ago. Her agency remains firm that such rumors are untrue.

On Thursday, local newspaper Kukmin Ilbo reported that Hong's dissertation titled "Study on the cultural content industry through Hallyu" which she wrote for the graduate school of trade studies at Chosun University scored a 74 percent plagiarism rate on Copykiller, an analysis service based on big data.

According to the report, 365 sentences out of the whole 556 sentences were "suspected of copying," of which 124 sentences share similar patterns with one another.

Hong's agency IMH Entertainment denied the speculation, explaining that in 2009, the trend in dissertations was that the more the citations, the better the quality.

"Back then, papers needed many citations for it to be passed. […] Since the Copykiller system was implemented from 2015 in universities, papers wrote beforehand can only inevitably show a high plagiarism rate," the agency said, which explained that it was citing the professor who had assessed Hong's paper.

"We have also confirmed with the artist that she did not plagiarize, except for citing and quoting [other sources] for research purposes."

Yet on Friday, another professor from Chosun University who taught Hong said that "it cannot be denied Hong's father, who is also a professor at the school, had an influence."

"Based on her scores throughout her bachelor's, master's and Ph.D. period, I am willing to testify that all her papers are fake," the professor said.

"She was a singer. How often could she have traveled all the way down to Gwangju?"

Hong's agency has not released any further statements.