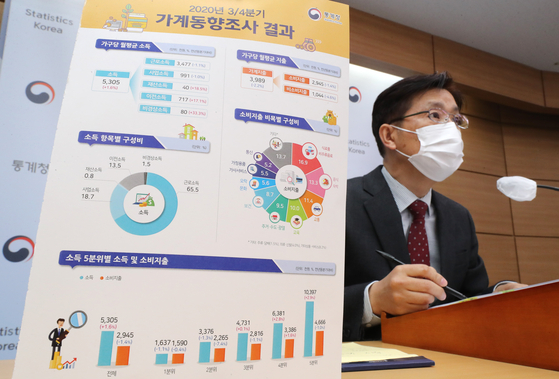 Chung Dong-myung, head of Statistics Korea's social statistics planning division, announces its study on household income in the third quarter of this year on Nov. 19 at the government complex in Sejong. [YONHAP]


The average household income in Korea has grown compared to a year ago while spending has dropped due to the impact of the coronavirus pandemic, according to Statistics Korea on Thursday.

The increase in income is largely due to government subsidies provided in combating the spread of Covid-19 as income earned through labor and businesses has actually fallen.

When excluding the government subsidy, lower income households were hit hard on income from labor and running a business, unlike the top 20 percent of earners, indicating that Covid-19 had a direct impact on vulnerable people.

According to Statistics Korea, the average monthly income of households in the third quarter of this year was 5.3 million won ($4,800), which is a 1.6 percent increase compared to the previous year.

However, average monthly income earned through labor shrunk 1.1 percent on year to 3.48 million won, while money earned through running a business shrunk 1 percent to 991,000 won.

“Labor income shrunk due to the decline of people employed as well as wage increases slowing down,” said Chung Dong-myung, head of the social statistics planning division at Statistics Korea, adding that this was the second consecutive quarter where labor income has fallen.

The bottom 20 percent by income saw a sharp drop in both labor and business income compared to other income groups.

That demographic in the third quarter suffered a 10.7 percent decline to their average monthly income, which was at 553,000 won.

This was a stark contrast to the top 20 percent.

An official from the statistics agency said businesses that are directly influenced by Covid-19 were affected the most.

“Among the business income, wholesale and retail shrunk 1.7 percent compared to the same period a year ago while other businesses [such as hair saloons] have declined 14.1 percent,” Chung said. “Restaurant and accommodation [income] struggled, falling 15.6 percent.”

On the contrary, income through personal assets including real estate and financial investment surged 18.5 percent to 40,000 won largely thanks to continuously rising real estate prices and the bullish stock market.

Household spending in the third quarter shrunk 1.4 percent year-on-year to 2.95 million won, a turnaround from the previous quarter when it went up thanks to the government’s emergency relief grant of a maximum 1 million won to every Korean household.

The spending cut came on the heels of stricter government social distancing after coronavirus cases resurged since mid-August.

Spending on food and beverages went up 18.7 percent largely thanks to the number of families cooking at home increasing due to social distancing. Home appliance spending rose 19.8 percent as people stayed home and health care spending also went up 12.8 percent.

However, people sharply cut back on entertainment and culture, which tumbled 28.1 percent. Spending on clothes and tickets for shows fell 13.6 percent, and education spending was down 13.6 percent as many private cram schools lowered tuition fees as students were taught online.

Spending on other events such as on wedding and funerals as well as religious contributions shrunk 4.6 percent due to social distancing guidelines.

The statistics agency’s study does not fully represent the real situation in Korea as it does not include people that live alone, which now accounts for one-third of households in the country.

According to Statistics Korea, as of the first quarter this year, the bottom 20 percent by income account for 42.3 percent of people that live alone. The top 20 percent only accounts for 4.2 percent.