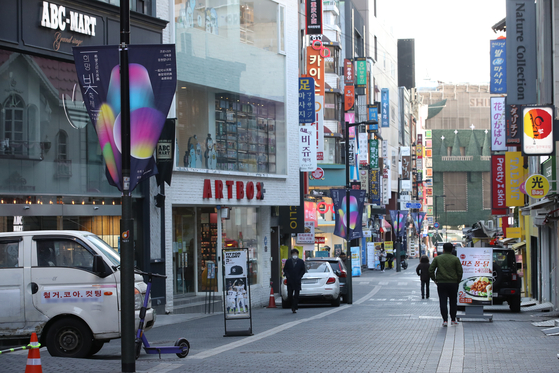 Streets in Myeong-dong remains empoty on Dec. 30 due to the strict social distancing that have been implemented since late November as the number of new infected cases hovering around 1,000. While the industrial output for November showed mild improvement, December's economic indicators may not be rosy. [YONHAP]

Industrial output improved in November, although the impact of the most recent wave of coronavirus infections may be felt this month.

According to Statistics Korea on Wednesday, Korea’s industrial output in November declined 0.6 percent year-on-year, an improvement from October when it fell 2.6 percent.

Compared to the previous month, however, industrial output increased 0.7 percent. In October, it fell 1 percent on a monthly basis.

This was largely due to the restaurant and accommodation industry contracting 2.7 percent month-on-month. Compared to a year earlier, that industry fell 17.3 percent.

“Retail sales shrunk, especially in clothing, furniture and automobiles,” said Ahn Hyung-joon, head of the statistics agency's short-term economic statistics department. “Especially in the case of clothing, while the relatively warm weather had some effect on the sale of winter clothes, the industry was [more] affected by people refraining from going out due to Covid-19.”

The situation was similar with automobiles.

“As Covid-19 spread in major countries overseas including Europe, automobile exports have shrunk,” Ahn said. “Covid-19 started to emerge [in other countries] in February and surged in April, May and in August. And every time [there was a surge], automobile exports declined. So we expect automobile sales [in November] declined due to the resurgence.”

This month could be worse as Korea suffers its own surge in virus cases.

“The spread of Covid-19 will contract retail sales as well as face-to-face services,” said Ahn. “The current resurgence that started since November has increased the instability of December’s economic performance.”