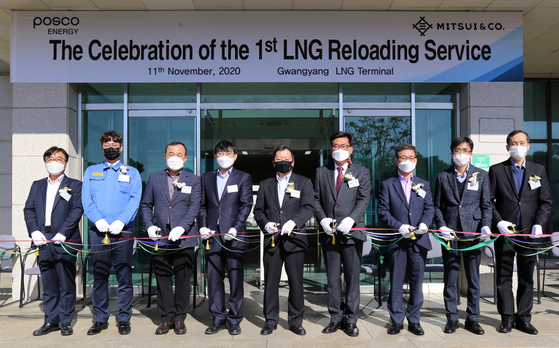 The energy producer held a ceremony on Wednesday marking the start of its new business at its Gwangyang LNG Terminal in Gwangyang, South Jeolla. Posco Energy acquired a license as an LNG operator from the Ministry of Trade, Industry and Energy in September.

The company will designate an LNG tank at its LNG terminal as a bonded area to store LNG that can be supplied to buyers.

Last month, the company singed a strategic agreement with Japanese trading company Mitsui & Co. in a bid to enhance its efficiency.

Posco Energy's LNG business is one of the 100 tasks Posco Chairman Choi Jeong-woo proposed that the company and its affiliates should pursue marking his 100th day in office in November 2018. Its first step toward the plan was the acquisition of Gwangyang LNG Terminal from Posco last September.

Taking advantage of its geographical location, Gwangyang LNG Terminal is capable of meeting the growing demand for LNG in neighboring countries including China and Japan, according to Posco Energy.

“As the country’s first LNG business operator, we will try harder to become a hub in terms of LNG terminal among countries in Northeast Asia," said Posco Energy CEO Jeong Ki-seop.