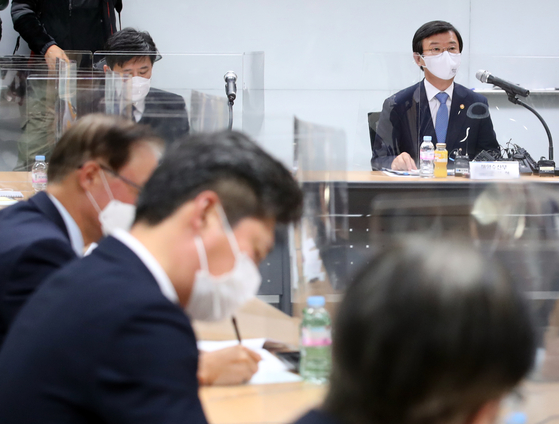 Minister of Oceans and Fisheries Moon Seong-hyeok speaks at a meeting with shipping executives to discuss ways to find exporters in Yeouido, western Seoul, on Wednesday. [NEWS1]

Export companies, particularly small- and mid-sized firms, are struggling with an increase in ocean freight charges and a lack of cargo ships, as shipments from China to the United States have jumped in recent months as U.S. companies rush to restock ahead of the holiday season.


Minister of Oceans and Fisheries Moon Seong-hyeok addressed the issue on Wednesday, urging the shipping industry to think about what's best for the "Korean economy, as well as profitability.”

“There needs to be an ecosystem which enables the shipping industry to share its recovery with export companies,” said Moon during a meeting with shipping executives in Yeouido, western Seoul, on Wednesday. “The Ministry of Oceans and Fisheries will offer a groundbreaking incentive to shippers that practice co-existence [with exporting firms] through close negotiation with relevant authorities.”

The total amount of transported cargo on domestic shippers’ container ships has recovered to 770,000 twenty-feet equivalent units (TEU) as of November, from 460,000 TEU right after Hanjin Shipping was declared bankrupt in 2017. The ministry’s goal is to reach 1.1 million TEU by 2022.

Hanjin Shipping was once the world’s seventh-largest container shipper, but it was declared bankrupt following its failed attempt to raise liquidity and restructure its debt. HMM is now Korea’s largest and the world’s eighth-largest shipper. Its largest shareholder is the Korea Development Bank, with 12.94 percent ownership.

Park Young-sun, minister of SMEs and startups, addressed the same issue last month. She posted a story on social media of a young start-up CEO who told her that they “can’t export these days because there aren’t enough ships. Orders have been piled up, but since I couldn’t meet the deadline, I have been told to pay a cancellation charge.” 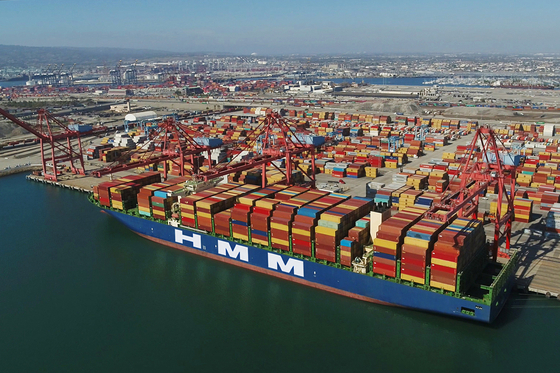 HMM is considering adding more ships sailing directly from Korea to the United States. Cargo will be loaded in Busan and sail directly to Los Angeles. It already added two container ships bound for Los Angeles from Busan last month to help exporters.

Although the quantity of transported goods hasn’t recovered to the pre-Covid level, international ocean freight charge have generally continued to increase over the past three months. The index reached a peak on Monday.

The Shanghai Containerized Freight Index, which reflects the fluctuation of spot freight rates on export container transport from Shanghai, rose 134.57 points to 1,664.56 as of Nov. 6. It was the highest index rate since records began in October 2009. The index is updated every Friday.

“With the release of relief packages and the prevalence of telecommuting in the United States, overseas purchases from the country increased dramatically,” said Kim Seong-min from HMM.

“The timing coincided with China’s resumption of manufacturing activity after its recovery from Covid-19, raising the quantity of goods transported from China to the United States. But the supply of ships can’t elastically increase, breaking the balance between supply and demand.”

The normal route to the United States picks up cargo in China before visiting other Asian cities and Busan and then crossing the Pacific Ocean to a port on the U.S. west coast. It is therefore more profitable for shippers to load cargo in China rather than picking it up along the way. Holding space until ships reach Busan is less profitable and could be a risk if not enough cargo is available once the ship arrives here.

The situation is especially unfavorable for small- and mid-sized exporters because they don’t usually sign long-term contracts to secure spots on ships.

SM Line, which also sails to the United States from Asia, said the break in supply and demand was a result of decreased supply in ships.

“Compared to last year, the amount of cargo transported is similar to the same period last year, or slightly less, but ship supply has been limited,” said Gang Chun-su from SM Line. “Following the Covid-19 outbreak, shippers expected the cargo transported to decrease and, therefore, reduced ship orders and routes. But compared to the stagnant supply, demand has been high.”