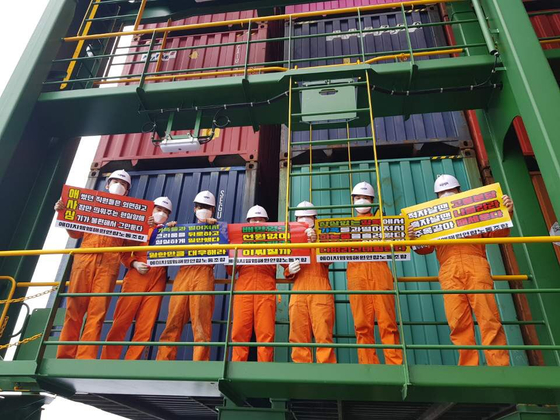 HMM captains demand a bigger pay rise as the company is expected to turn an operating profit for the first time in a decade. [HMM LABOR UNION]


HMM’s operating profit this year is projected to surpass 800 billion won ($732 million) after shipping costs increased in recent months, potentially putting the company in the black for the first time since 2010.


But the shift to profit-making comes as workers complain that they are not compensated enough considering the company's improved earnings.

One complaint comes from a labor union representing ship captains, who argue that they deserve a bigger raise this year since they have endured lower pay for years as they waited for Korea’s shipping industry to have recovered.

HMM is the eighth largest shipping company in the world by capacity.

The shipping industry has seen improved earnings in the second half of the year as transportation demand outweighed supply.

When shipping demand plummeted following the outbreak of the Covid-19 pandemic, shippers reduced the supply of ships. But the quantity of goods transported from China to the United States has recovered quickly and demand quickly outpaced the number of ships.

The Shanghai Containerized Freight Index (SCFI), a barometer of ocean freight rates, jumped 8.6 percent on Dec. 11 from the previous week to hit 2311.76 — the highest since the index began in October 2009. The average index rate last year was 823.53.

Experts project that the SCFI will continue to rise next year.

It can take two to three months for shipping containers to go back into circulation after they are unloaded from a ship.

“Long-term contracts are typically signed from March to April," said analyst Choi Go-woon from Korea Investment & Securities. "This year, the contract conditions for shippers was unfavorable due to Covid-19. But the situation could reversely become favorable” if high shipping rates continue throughout the first quarter next year.

Despite the rosy prospects, employees are not satisfied with limited increase in salary and are considering striking.

A labor union representing marine workers on Monday said that they “have endured everything for the recovery of Korea’s shipping industry and the company as a result has reported the largest profit. But the company is not compensating the workers, saying it needs to pay off its debt.”

The labor union added, “The 1 percent rate increase in salary proposed by the company is like fooling the employees whose pay had been frozen over the past six years.”

The pay of HMM employees working on land has stayed the same for nine years.

The issue will be arbitrated through the National Labor Relations Commission, designed to mediate labor disputes on request, on Dec. 21 and 24.

The commission is under the control of the minister of employment and labor.

The labor union plans to go on a strike if a consensus is not reached.

HMM has been under the management of creditors since 2016, a year before bigger domestic rival Hanjin Shipping was declared bankrupt in 2017.

HMM’s total liabilities as of the third quarter came to 7.42 trillion won.