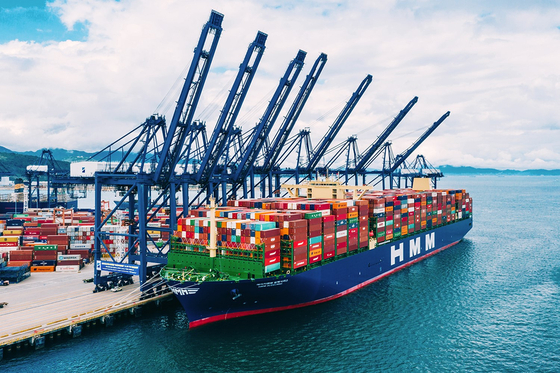 
Ocean freight rates are rising steadily as high demand has led to a shortage of containers and to congested ports.

The Shanghai Containerized Freight Index (SCFI), a barometer of ocean freight rates, hit 3,343.34 points on May 14, a record high. On year, it is up three-fold.

While the SCFI has been rising steadily during the pandemic, it has spiked since March when the Ever Given blocked the Suez Canal for six days.

A forty-foot equivalent unit (FEU) traveling between Asia and East Coast America hit an all-time high on May 14 of $7,378, up $342 from the previous week. An FEU Asia to the U.S. West Coast was $4,839, according to the Ministry of Oceans and Fisheries and Ministry of Trade, Industry and Energy.

Prices for shipments on bulk carriers, which transport unpackaged cargo like grain, coal, ore and steel coil, have also climbed.

The Baltic Dry Index (BDI), a benchmark index of average prices paid for the transport of dry bulk materials, hit 3,254 as of May 11. Compared to the same day last year, when the index was only 474, it’s up nearly seven-fold. It broke the 3,000 mark late last year, for the first time in a decade.

According to Clarksons Research, a market researcher for the shipbuilding industry, the traffic is likely to increase 5.7 percent this year compared to last year.

Local companies, especially small- and medium-sized enterprises, are being hit hardest. Despite the surge in the number of orders, the companies are struggling to reserve enough cargo space. They have no choice but to pay whatever amount is asked.

People from the shipping industry say they are feeling the absence of Hanjin Shipping, which declared bankruptcy in 2017.

Hanjin Shipping was once the world’s seventh-largest container shipper, but it was declared bankrupt in early 2017 following its failed attempt to raise money and restructure its debt.

“No matter how many times the government comes up with countermeasures, the country no longer has enough ships,” said a source from ship industry, who spoke on the condition of anonymity. “During this time, as exports boom, I feel so sorry for the absence of Hanjin Shipping.”

HMM is now Korea’s largest and the world’s eighth-largest shipper. But the shipper is also struggling to secure container ships to cover the anticipated demand.

“In Korea, a country that exports a lot, shipping business is a key industry that is responsible of the country’s transportation infrastructure,” said Pak Myong-sop, a global business administration professor at Sungkyunkwan University. “It is regrettable that the country lost the shipping route network and know-how that Hanjin Shipping had acquired for decades.”

Last week, the government came up with some countermeasures to support local companies that are struggling due to rising freight rates. The government said it plans to put six temporary container ships on the east and west coasts of America, as well as a 16,000-TEU vessel on the Asia-Europe route six times through month, one ship per week.

The government is also increasing the amount of money it will use to financially aid local companies paying high freight rates, from 7 billion won ($6.16 million) to 12.1 billion won in 2021.