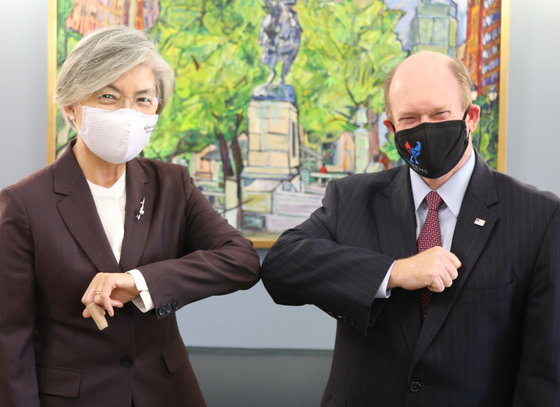 
Korean Foreign Minister Kang Kyung-wha said Tuesday she met with figures known to be close to U.S. President-elect Joe Biden in Washington and emphasized that the North Korea denuclearization negotiations should be an issue prioritized by the new administration.

Kang met with a series of scholars at think tanks and congressmen as part of her outreach to the Biden campaign, including Democratic senators Chris Coons of Delaware and Chris Murphy of Connecticut, and John Allen, president of the Washington-based Brookings Institute.

Coons, who hails from Biden’s home state and is known for his extensive foreign policy experience, has been floated as a possible U.S. secretary of state in the new administration. Murphy, a member of the Senate Foreign Relations Committee, is another U.S. top envoy contender.

Kang said she explained to the senators the Korean government’s desire to advance the Seoul-Washington alliance and vision to completely denuclearize and establish a permanent peace on the Korean Peninsula, alongside other key issues.

Allen, a retired U.S. Marine Corps four-star general and a special presidential envoy for the Global Coalition to counter the Islamic State of Iraq and the Levant (ISIL) under the Barack Obama administration, is reported to have advised Biden on foreign affairs and security policy.

Kang told reporters that Allen “said he would convey our government’s position on the Korean peace process and on key alliance issues to the president-elect’s side.”

She added, “As we have experience in the past of a Democratic administration closely cooperating with our government for peace on the Korean Peninsula, we look forward to Korea and the United States working together after the launch of the Biden administration.”

In the four-day trip that concludes Wednesday, Kang held talks with U.S. Secretary of State Mike Pompeo and White House National Security Adviser Robert O'Brien Monday and held a press conference with correspondents at the Korean Embassy in Washington Tuesday.

Kang also met with Republican Sen. Jim Risch of Idaho, the chair of the Senate Foreign Relations Committee, and Democratic Sen. Bob Menendez of New Jersey, a ranking member of the committee who has been vocal over the years on North Korea issues and is close to the Korean-American community.

President Moon Jae-in on Sunday congratulated President-elect Biden and Vice President-elect Kamala Harris on their election victory through Twitter, writing: “Our alliance is strong and the bond between our two countries is rock-solid,” and expressed “great expectations of advancing and opening up the future development of our bilateral relations.”

The Blue House said Wednesday that it is working to arrange Moon’s first phone conversation with Biden on Thursday.

A Blue House official said, “We are coordinating a schedule so that they can have phone talk tomorrow.”

Biden had a series of phone conversations with British, French and German leaders on Tuesday. Japanese media said Japanese Prime Minister Yoshihide Suga is planning to have talk on the phone with Biden on Thursday.

Ahead of his planned phone talk with Biden, Moon had a two-hour working luncheon with his special advisers and foreign affairs experts.

According to the Blue House, Moon listened to their recommendations for the administration’s foreign affairs and national security policy with the incoming U.S. administration.

According to the Blue House, the participants discussed efforts to expand global cooperation to counter the Covid-19 pandemic and climate change. They also discussed ways to accomplish North Korean denuclearization.