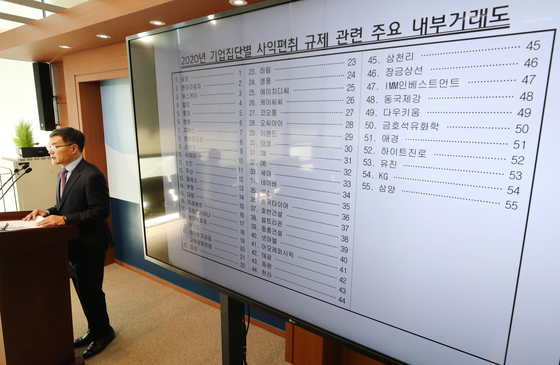 FTC director Sung Kyung-jae, announces its study on conglomerates internal transactions at the FTC headquarters in Sejong on Nov. 12. [YONHAP]

The value of related-party transactions between companies within the same chaebol was virtually unchanged in 2019 from 2018, but large groups with significant founding-family shareholdings reported more trade between related companies.

These transactions were 12.2 percent of all chaebol revenue. That’s the same as in 2018.

The study was of 64 groups with total assets exceeding 5 trillion won.

The total number of companies in the groups was 1,955.

For the past three years, intra-chaebol transactions have been at least 190 trillion.

The FTC noted that business transactions were heaviest among unlisted group companies, especially the 55 controlled by founding families.

For companies in groups controlled by the founding families, 12.5 percent of their business was intra-chaebol. For professionally managed groups in the study, the rate was 10.4 percent.

Such transactions accounted for 14.1 percent of total revenue of the largest 10 chaebol by assets, up from 2018’s 13.8 percent.

Among the chaebol, Celltrion topped the list at 37.3 percent, SK followed at 26 percent and Taeyoung, a construction and media company that owns SBS, came in at 21.4 percent. Hyundai Motor ranked fourth with 20.1 percent.

By amount, SK topped the list with 41.7 trillion won of related-party transactions, followed by Hyundai Motor with 37.3 trillion won and Samsung with 25.9 trillion won.

Those that are found to have engaged in unfair business practices could face penalties, including prison.

The goal is to prevent the families from manipulating group companies, especially unlisted companies, in order to extract wealth or illegally pass wealth to heirs.