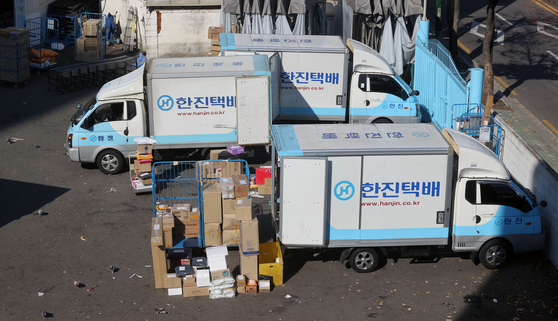 Parcel delivery workers load their trucks at a logistics center in Seoul on Nov.12. Working conditions of delivery workers have become a major social issue as the volume of parcels has increased thanks to the coronavirus outbreak. [YONHAP]


Companies should restrict the working hours of parcel delivery workers to around 10 hours a day, according to the government, to prevent overwork that leads to accidents and possibly even suicides.

The Ministry of Employment and Labor and the Ministry of Land, Transport and Infrastructure Thursday recommended several measures to improve working conditions for parcel delivery workers, who are overstressed.

Some 13 have died this year, including three suicides. It is not entirely clear whether the deaths were in any way related to the actual work. What is clear is that delivery workers have been busy, some have been under stress and they have been passing away at much higher rates this year than in previous years.

Aside from limiting working hours, the companies are being advised to adopt a five-day workweek for the delivery workers and limit deliveries made after 10 p.m. during the week.

The ministries' recommendations are only guidelines with no legal force.

Parcel deliveries have shot up this year as online shopping boomed during the coronavirus outbreak.

According to the Transport Ministry, parcel deliveries in the first eight months increased 20 percent year-on-year to 2.16 billion parcels.

That figure could rise when including the Chuseok holiday between late September and early October.

Logistics companies have been promising fast deliveries — including within one day of purchase.

Parcel delivery workers have been demanding some relief, such as not having to sort parcels anymore.

Parcel delivery workers are subcontractors of major logistics companies and don't have many benefits. Most do not have employment insurance or work-related injury insurance.

“The death of 10 parcel delivery workers [excluding those that committed suicide] this year shows that the system, infrastructure and technology have failed to catch up with the speed of the parcel industry’s quantitative expansion,” said Employment and Labor Minister Lee Jae-kap Thursday.

The minister said the guidelines are the first step towards protecting parcel delivery workers from overwork and to improve the delivery industry itself.

The Transportation ministry said from next year through 2023 it will create a minimum of 30 parcel sorting centers that can be shared among different companies. They will be built on unused land including subway depots.

The goal is to reduce the hours it takes to sort parcels, which delivery workers are forced to do.

Additionally, the government will offer 500 billion won ($449 million) or more in support for logistics companies to use automatic sorting facilities.