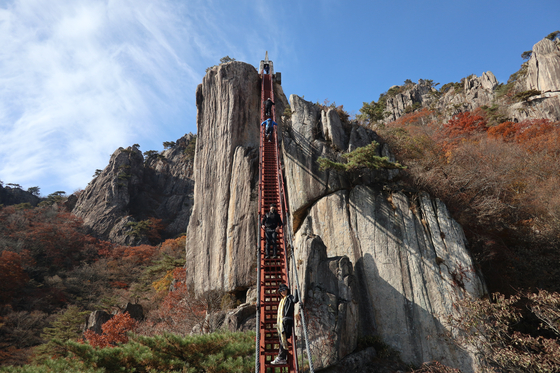 Visitors to the red staircase in Mount Daedun in Wanju County, North Jeolla, walk up, hands tightly holding onto the handles on both sides, or take a break to pose for a photo. [LEE SUN-MIN]


WANJU COUNTY, North Jeolla — A single photo of a red-colored staircase that appears to be hanging onto the side of a long cliff has been enough to inspire many to pack their bags and head to Mount Daedun in Wanju.

Wanju County has been overlooked by many thanks to its popular neighbor city of Jeonju, home of one of the largest hanok (traditional Korean house) villages in Korea. But with the current travel trend focused on visiting less well known spots, Wanju has been getting more attention from domestic travelers than ever before.

Even K-pop boy band BTS chose the county to spend its vacation in, and relaxed at Awon Gotaek, one of the hanok-style resorts with an art gallery located in a flat area surrounded by mountain, and also filmed its music video.

Anywhere you hike, it will be easy to spot local elderly women selling what they've gathered from the mountain. All types of seasonal mushrooms and vegetables are up for grabs and if you cross paths with the right seller, you can even sample some of the vegetables on display free of charge.


Be bold, climb up
Hiking all the way up to the summit of Mount Daedun, which is about 878 meters (2,881 feet) high, isn’t the only way to reach the top. Thanks to a cable car that takes you to an observatory close to the top within six minutes, you can view the brightly colored scenes below as well as the many uniquely shaped big rocks near the top to make your photos even more dramatic. 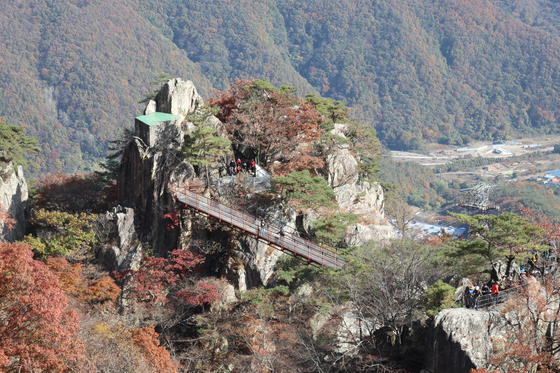 The distance between the observatory and the seemingly gravity-defying red staircase is not far. But, it is steep. Most of the pathway has steps built into it making it a relatively easy walk, but the steepness means it's essential to grasp onto the handrail along the way. It takes about 20 minutes to get to the bottom of the stairs if you don’t stop in the middle, but a stop is a must as you will be crossing one suspension bridge, which is also a great place to enjoy the view. The staircase is also visible from the bridge.

When you reach the bottom of the staircase, there is no denying that it's intimidating. Some just take photos and leave to take another route to get to the top of the mountain, while others take their first step. Since the staircase is so narrow, about 50 centimeters (19.7 inches) wide, once you embark on the journey up there's no real turning back without excusing yourself to every hiker behind you. There is an upside to the narrow staircase in that the handrails partially obstruct the view making it slightly less terrifying.

“Don’t look back and just keep going up,” is the phrase many first-timers murmur to themselves.

After about 25 to 30 steps of the 127, turn around if you can and sit down on the steps to take a photo of yourself, however terrified you may be. After reaching the top, one can relax slightly and even summon up the courage to walk down a few steps to have some photos taken by someone on the top with a view of the blue sky and fall colors as the backdrop. Just like you were able to take photos of the staircase from the suspension bridge, you can take a photo of the suspension bridge from the staircase. Even the county office has a photo of the bridge taken from the staircase hanging on its wall.


From the top of the stairs to the summit of the mountain, it takes about 15 minutes on a steep and rocky path.

Before hitting a restaurant to reward yourself for your hard work, make sure to have a look at the different mushrooms gathered by local women that are on sale at the bottom of the mountain near the cable cars. They are kind enough to offer up a piece of deodeok, or root vegetables, to try, the skin of which is freshly peeled, and even offer some gochujang, hot pepper paste, to dip your vegetable in.

Classic Korean all the way
Anything BTS touches seems to turn to gold and Awon Museum and Hotel, a hanok resort in Wanju, is no different. It is more commonly known to Koreans as Awon Gotaek. Gotaek means older house. 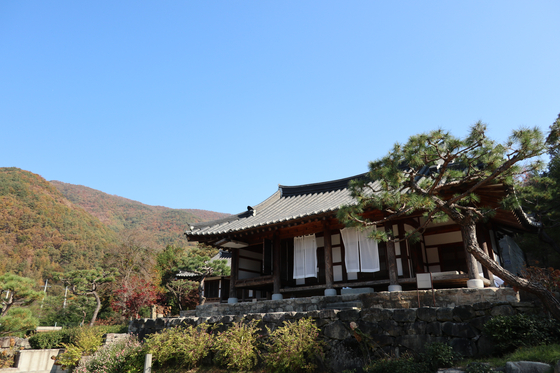 A view of one of the 250-year-old hanok at Awon Museum and Hotel in Wanju, North Jeolla. [LEE SUN-MIN]

This particular resort had been a hot spot for those hunting for a quiet place to enjoy both art and nature but gained widespread attention after it appeared in a music video featuring BTS called “2019 Summer Package in Korea.”

Taking full advantage of the hilly land, the downstairs space is used as an art gallery, the ceiling of which is a moveable pond. The amount of sunlight entering the gallery can be controlled by moving the pond.

The upstairs space is a well-known spot for portraits, offering a scenic backdrop of the mountains. If getting a shot that includes the hanok is key for you, try sitting down on the open area under the roof then taking a photo with the mountains as a distant backdrop.

Different from other hanok resorts known for being in the same location for centuries, these hanok were moved from Jinju, South Gyeongsang, and are about 250 years old. Every piece of their frames was deconstructed and rebuilt, a process that hanok are ideal for considering they don't use nails. 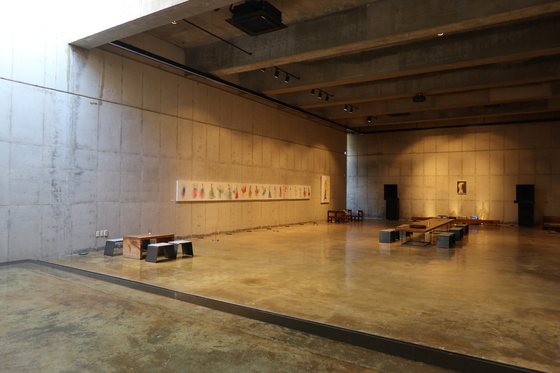 The space under the hanok building is used as an art gallery at Awon Museum and Hotel. [LEE SUN-MIN]

If the price tag for an overnight stay, which starts at 270,000 won ($242), is out of your budget, just spend a few hours visiting instead. If you buy a ticket to the art gallery there, for a much more reasonable 10,000 won, you can also access the resort area between 1 and 5 p.m.