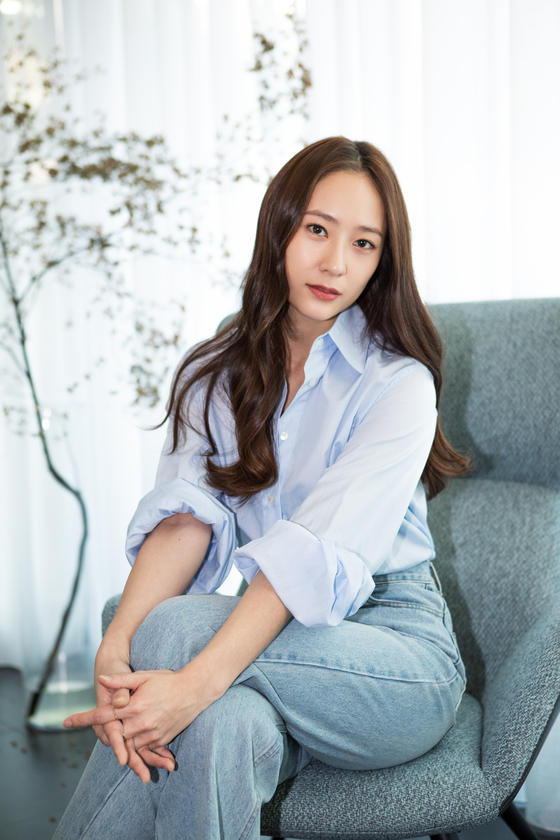 
Wearing her hair scraped back into a ponytail and wearing almost no makeup, the character Krystal Jung portrayed in her first film “More than Family” couldn't be further from how the singer-turned-actor usually looked while on stage as a member of girl group f(x). Jung's character is a 21-year-old college student who decides to get married to her boyfriend after realizing that she is pregnant.

Krystal debuted as a member of the girl group f(x) in 2009 and made her TV debut when she appeared in the MBC sitcom “More Charming by the Day” in 2010. Even after building up an impressive resume with “High Kick: Revenge of the Short Legged” (2011), “The Heirs” (2013) and “Prison Playbook” (2018), Jung’s acting talents were often overshadowed by her identity as Krystal of f(x).

But after the premiere of her first film on Thursday, it looks like a new chapter is about to begin for Jung as an actor. 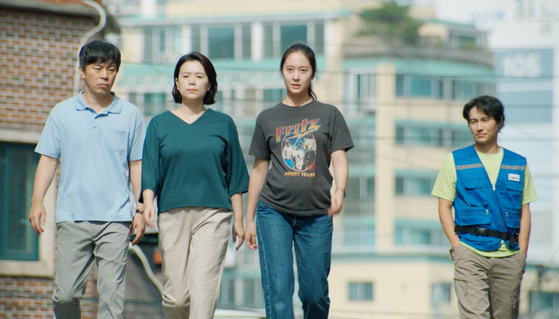 Actor Krystal Jung portrays Toe-il, a 21-year-old pregnant college student who decides to get married to her boyfriend. [H& ENTERTAINMENT]

Director Choi Ha-na’s first feature film "More than Family" is a family drama in which Toe-il, Jung's character, embarks on a trip to search for her biological father whom she lost contact with 15 years ago, after quarreling with her mother and her stepfather when she announces that she is pregnant and that she will get married. After returning home from seeing her father, she realizes her boyfriend and father of her baby has disappeared, so she sets out on another journey.

“I decided to take the role right away after reading the script because it was so fun to read,” Jung said during a press interview at a cafe in Samcheong-dong, central Seoul, last week.

Although she didn't hesitate to snap up the role, she said she cried in frustration before shooting because she wasn’t sure whether she could pull off her part how the director wanted.

“There were parts where I couldn’t understand why Toe-il would act a certain way or say certain things. But whenever I seemed a bit lost, for instance hiding her pregnancy for five months from her parents, director Choi told me that Toe-il is a character who thinks she is the smartest, and who thinks everything she does is right. By thinking that she is a different person from myself, I tried to accept and act out her emotions.”

Jung said that she and Toe-il share the characteristic of being self-confident and placing their happiness as their first priority in life, but how they communicate with their parents is completely different.

“I think I can relate to how Toe-il trusts herself and acts confidently, but not to how she talks in such a unilateral way to her parents. Whenever I have to make a big decision in my life, I tend to discuss it with my family members and listen to their opinions. I’m not as reckless as Toe-il" (laughs). 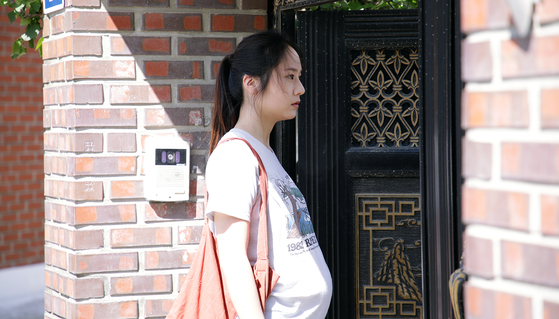 Actor Krystal Jung portrays Toe-il, a 21-year-old pregnant college student who decides to get married to her boyfriend. [H& ENTERTAINMENT]

She said she wasn’t worried about how she would appear in the film, but instead she focused on understanding the emotions of Toe-il.

“I tied up my hair in a ponytail and didn’t put much makeup on either because Toe-il is a character who doesn’t care about her appearance. Even the clothes I wore are from my actual closet.”

After the shooting ended, she said she had a new respect for women who have children and the pain they have to endure during pregnancy.

“Walking like a pregnant woman was not as difficult as I had expected, because the posture came naturally as I was wearing a fake pregnant belly. But the back pain lasted and I had to get physical therapy on my spine multiple times. Wearing a fake pregnant belly was like carrying a backpack on the front of my body. Especially because the shooting was during the hot summer, wearing the fake belly under my T-shirt was really tough.”

Except for Shin Jae-hwi who played Teo-il’s boyfriend, the rest of the cast, Jang Hye-jin, Choi Deok-moon, Lee Hae-young, Kang Mal-geum and Nam Moon-cheol, who played her mother, stepfather, father, future mother-in-law, and future father-in-law, are all veteran actors.

“There was never a time when I didn’t enjoy myself while shooting. At first I was very worried because it was my first time appearing in a film, but knowing that I would be nervous, my co-actors were all very considerate and supportive to help me bring out the Toe-il in me.”

The actor introduced the film as a family drama that can be enjoyed by anyone regardless of age or gender.

“Although everyone has a different sense of humor, our movie has various kinds of funny moments, so I think every audience member will be able to enjoy watching the film."

Regarding future activities, Jung said she is open to both of her careers as an actor and a singer.

"I enjoy acting because I can try living the life of a completely different character, but I still think of myself as a singer as well. I don't want to let go of f(x) because I like myself as Krystal of f(x) also.”

The tragedy of family suicide (KOR)