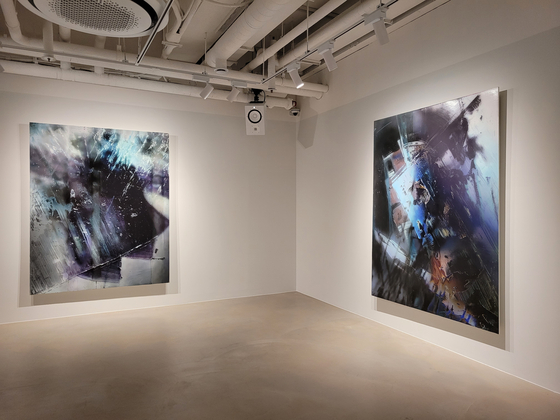 Works by young Korean artist Bea Sungyong are on view now as part of the inaugural exhibition of Gallery 9.5 in Hotel Anteroom Seoul, which newly opened near Garosu-gil in southern Seoul. [MOON SO-YOUNG]


Hotel Anteroom Seoul, which newly opened near Garosu-gil in southern Seoul, unveiled its inaugural exhibition of Gallery 9.5 on its underground floor last week. The exhibition titled "Transducer" features works by young Korean artist Bea Sungyong, in which a painting and a photograph of the painting is elaborately combined on one canvas, and the soundscape of Japanese composer Marihiko Hara. The exhibition was curated by the famous Japanese artist Kohei Nawa, who is in charge of art direction at Hotel Anteroom's branches in Kyoto and Okinawa in Japan and Seoul. "Not only exhibitions but also various cultural events will be held in this gallery and hotel rooms," said Jo Jang-hwan, head of UDS Korea, the local affiliate of Japan-based UDS Hotels, "We are considering collaborating with designers' small shops in the nearby alleys called Duirosu-gil [which means the backstreets of Garosu-gil]. UDS is famous for Muji Hotel and other hotels focusing on creative design and development of local cultures. [MOON SO-YOUNG]