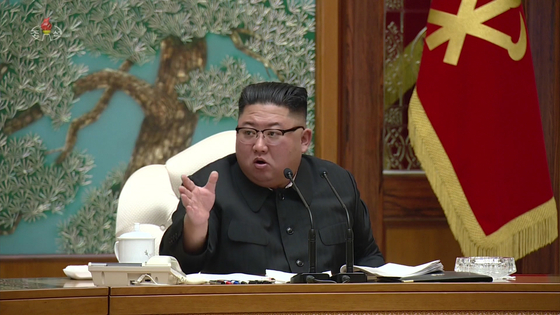 North Korean leader Kim Jong-un presides over an enlarged Politburo meeting of the regime's ruling Workers' Party on Sunday, according to footage from state television on Monday. Such meetings have become increasingly frequent as economic difficulties have mounted for the country amid the Covid-19 pandemic and continuing international sanctions. [YONHAP]


Emerging publicly for the first time in weeks, North Korean leader Kim Jong-un on Sunday condemned “non-socialist” practices rampant in the regime and called for a national campaign to root them out, state media reported Monday.

According to the official Korean Central News Agency (KCNA), Kim presided over an enlarged meeting of the ruling Workers’ Party Central Committee Political Bureau convened to tighten antiepidemic measures amid the Covid-19 pandemic.

Though vague in its description, the KCNA said in an English-language report that the meeting was further used to “sharply criticize” a "serious crime" perpetrated by the party committee of the Pyongyang University of Medicine.

Other party departments and judicial, prosecutorial and security organizations were also condemned for showing “irresponsibility and extreme dereliction of duty” by failing to exercise proper guidance over the university and monitor its activities, the report added.

The meeting stressed “the need to awaken the Party organizations at all levels once again and wage a fierce Party-wide struggle to root out practices against the Party, the people and socialism” as well as “to upgrade the law enforcement so as to make sure that beautiful socialist traits are maintained in the overall socio-political, economic and moral life,” the KCNA said.

Not much is known about what kinds of practices at the university — the top medical school in the country — invited such strong censure on an official level.

South Korea’s Ministry of Unification said it had no information on the incident.

But the crackdown on the alleged crime is reminiscent of a case in February, when Kim sacked the powerful director of a party personnel department after “acts alien to the party, abuse of power, practices of privileges, indulgence in bureaucracy, corruption and irregularities” were apparently revealed among senior party officials and officials of a party cadre training institution.

Two party vice chairmen — Ri Man-gon and Pak Thae-dok — were sacked at the time, while those accused of direct involvement in corruption at the party’s training institution were harshly punished. The events were regarded as Kim’s attempt to shore up internal discipline among the elite as his cash-strapped regime navigated the pandemic crisis.

North Korea maintains it has no Covid-19 cases, but the claim has been widely disputed by foreign experts. The regime meanwhile continues to keep its borders tightly shut for fear of contagion.

Sunday’s meeting was also the first time Kim has emerged publicly in 25 days. He was last seen visiting a graveyard for Chinese troops that came to the regime’s aid in the 1950-53 Korean War.

Neither the North’s government nor any of its official mouthpieces have issued responses or reports on the election of Joe Biden as the next president of the United States — an uncanny extended silence that may speak to the regime’s anxiety over the future of its negotiations with Washington.

Pyongyang before the election made no secret of its preference for the incumbent, Donald Trump, touting the president’s chemistry with Kim in multiple official statements during and after their three summits.

For Biden, on the other hand, the regime slung such vitriol as calling him a “rabid dog” or a “fool of low I.Q.”

Biden, for his part, called Kim a “brutal dictator” and a “thug,” making clear he would not show the bonhomie Trump has given the North Korean leader throughout the past two years.

Though analysts noted the North’s reticence may be due to the fact that Trump has yet to concede the race, concerns have been mounting that it could respond to Biden’s victory with a provocation — missile launch or otherwise — aimed at testing the president-elect’s bearing toward the regime.