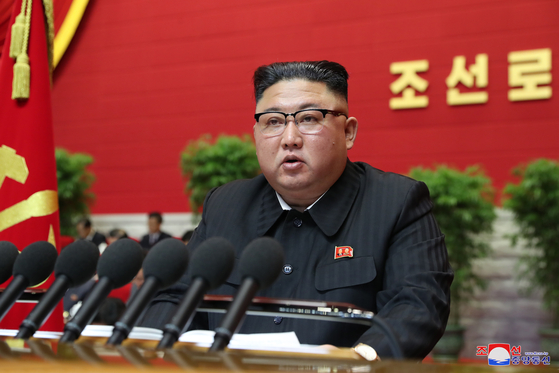 North Korean leader Kim Jong-un delivers an opening address to the eighth Congress of the ruling Workers' Party on Tuesday, according to state media on Wednesday. [YONHAP]


North Korea convened the eighth Congress of its ruling Workers’ Party on Tuesday with an address by Kim Jong-un, the leader admitting the regime fell “extremely” short in meeting its economic goals over the last five years.

Kim presided over thousands of party delegates gathered in Pyongyang for the congress, conducted amid heightened Covid-19 measures, marking the inauguration of the biggest political event in the country.

While stressing the importance of the congress as a “stepping stone” toward a great leap, Kim also made a rare admission of failure in his address, noting the regime’s five-year plan that ended last year had “in almost all areas fallen extremely short” of its objectives.

Challenges undermining the regime’s progress came “both from outside and inside,” Kim said, as international sanctions have throttled North Korea’s economy.

As for the “flaws” in the country’s own efforts, Kim stressed the “painful lessons” learned throughout should not be repeated, and that strong measures should be established to prevent errors from evolving into greater problems, according to a Korean-language readout of his speech released by state media.

No comments were made on matters of foreign and inter-Korean policies during the event’s first session, which was largely devoted to the economy and the response to Covid-19.

The official Korean Central News Agency (KCNA) did report that “important issues arising in accomplishing the cause of national reunification” and “promoting external relations” would be among the strategic and tactical policies Kim would outline.

This week’s congress has long been anticipated by the regime as a means to raise morale and set new aims to overcome the consequences of its 2020 annus horribilis. In addition to the continued strain of sanctions, trade with China dried up due to strong Covid-19-related border restrictions, and intense typhoons in the summer heavily damaged key grain producing areas.