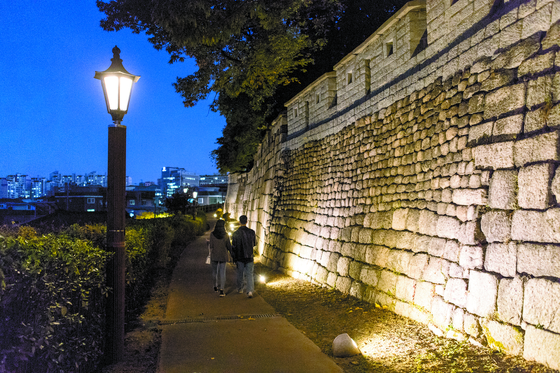 Civilization owes much to stonemasons. The most notable example is the Egyptian pyramids. Stonemasons were the ones who signaled the beginning of the Joseon Dynasty (1392-1910). The same goes for the 18.6-kilometer (11.6 mile) Seoul City Wall surrounding Seoul.

On Nov. 12, the city government announced that the remains of the Seoul City Wall at the foot of Mt. Namsan will be open to the public. It is a part of the city wall that was considered buried and disappeared for more than 100 years. The remains revealed were built in 1396, early in the Joseon Dynasty.

Maintenance of the capital was an important task for the Joseon kings. Taejo, Sejong and Sukjong carried out large-scale civil engineering projects and you can tell the construction period by the shape of the castle stone.

The stones from the time of King Taejo are rough, when the walls were first built. The construction was rushed in order to defend the capital of Hanyang and the palaces. The second construction was carried out in the fourth year of King Sejong’s reign in 1422. To maintain the fortress’s strength, large stones were trimmed and stacked at the foundation. Smaller round stones were stacked on top. King Sejong reused the stones from Taejo’s construction. When his father Taejong passed away and Sejong had full power after four years, he mobilized 320,000 people across the country for the reconstruction project.

In the 30th year of King Sukjong’s reign in 1704 — nearly a century after the Japanese invasion in the late 16th century — cubes were used for reconstruction. The size of the stones has increased compared to the time of King Sejong. Each stone was so heavy that four adults had to carry it.

The 4.2-kilometer Mt. Namsan section of the Seoul City Wall that the city of Seoul made public has a painful history. I felt especially sorry as I walked along the Namsan section. Most of the path is made with concrete and rocks, as most parts were lost. The 2.6- km sections in Mt. Namsan and Jangchung-dong were restored in the 1970s using a huge amount of stones from the construction of Namsan Tunnel 3.

The Seoul City Wall is connected to the site of the Korea Freedom Federation and Tower Hotel, currently Banyan Tree Hotel, but the walls are nonexistent here. Parts of the stones were used as foundations for the Freedom Center and Tower Hotel.

The Cultural Heritage Administration’s research revealed in 2007 that legendary architect Kim Su-geun demolished parts of the wall and used the stones. It is unconfirmed whether Kim intentionally damaged the city wall. Is history chronological or the reverse?