When an eight-panel folding screen featuring a hunting scene was put up for auction at Christie's last September, officials at the Overseas Korean Cultural Heritage Foundation say they “instantly and instinctively felt that the painting was of high value and it should be brought back to its motherland.”

With a successful bid, the foundation managed to bring the painting back and organized a special exhibit to celebrate its homecoming at the National Palace Museum of Korea in central Seoul from Feb. 18. The eight-panel folding screen measures 392 centimeters (154 inches) long and 154.7 centimeters high.

This painting titled “Hunting Scene” is in a style called Horyeopdo, which means “northern barbarian people hunting.” It depicts the emperor of the Qing Dynasty (1616-1912) enjoying a hunting exhibition.

Horyeopdo is not a rare type of painting.

There are dozens more of such paintings in other museums across the country, as well as one in the British Museum and another in the Cleveland Museum of Art. But according to the Overseas Korean Cultural Heritage Foundation, the recently purchased painting is of better quality, “showing features of a high-quality court painting with its magnificent expression of the landscape and exquisite depiction of human figures.” In contrast, the foundation says the existing ones in Korea are “focused mainly on folk painting style.” 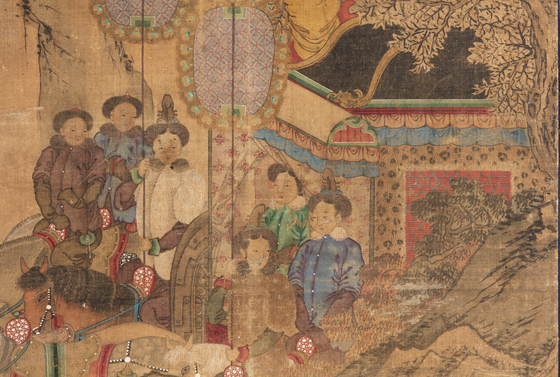 The man in blue outfit is the Qing Dynasty's emperor. [CULTURAL HERITAGE ADMINISTRATION]


When the Joseon Dynasty (1392-1910) entered the era of King Jeongjo’s reign (1776-1800) of the so-called “reformed monarch,” a strange art collection fad spread among the royal family and the nobles. It was to possess and hang a Horyeopdo painting of the Qing Dynasty imperials, whom the Joseon people called “barbarians.”

There are even records that state that many Joseon nobles tried to get their hands on the paintings by asking envoys traveling to the Qing Dynasty to obtain locally produced Horyeopdo.

The person who took the lead in this strange fad was King Jeongjo. He ordered one of Joseon’s most-renowned painters Kim Hong-do (1745-1806) to paint a Horyeopdo to hang inside the palace and made the royal family as well as the courtiers observe it.

Why did he want a painting featuring the “barbarians” who made the preceding King Injo fall on his knees in a humiliating surrender?

According to the Cultural Heritage Administration, people of Joseon at the time had an ambivalent feeling toward the people of the Qing Dynasty.

The Joseon Dynasty was invaded twice by the Manchu forces, once in 1627 and again in 1636, forcing King Injo to surrender to Qing’s Hong Taiji. Because of this, Joseon Dynasty regarded the Qing Dynasty as a “barbaric nation.” But toward the end of the 18th century, some 140 years later, with the cultural influx of the Qing Dynasty, which was the most powerful nation at the time, the Joseon people’s feeling toward the Qing Dynasty began to change and the interest in it began to rapidly increase. Against this complex background and in line with the military policy of King Jeongjo, such style of paintings began to proliferate in Korea. 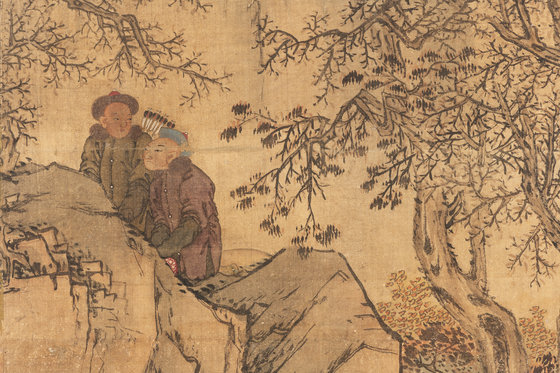 The painting style is similar to Joseon's renowned artist Kim Hong-do. Experts revealed that it's a replica of Kim's painting. [CULTURAL HERITAGE ADMINISTRATION]


Historians believe that King Jeongjo's desire to stress the importance of knowing who your enemies were and being prepared for war, gradually turned into a cultural fad among the people.

When it was put up for auction by Christie's, it introduced the painting as Kim Hong-do’s, who is also known as the artist who first painted this style of painting upon King Jeongjo’s orders. But after local experts’ research, it was concluded that it is a replica of Kim’s work by a later generation painter.

“It seems that the landscape expression of Horyeopdo, which was converted this time, is very similar to Kim Hong-do's paintings, and was drawn by a Dohwaseo Painter in the late 18th or early 19th century,” said Chung.

“The returned painting is expected to broaden the scope of research into paintings on this theme, which has thus far been focused mainly on folk painting, and will be utilized for diverse purposes including exhibition and education,” said Kim Byeong-yun, an official from the Overseas Korean Cultural Heritage Foundation.