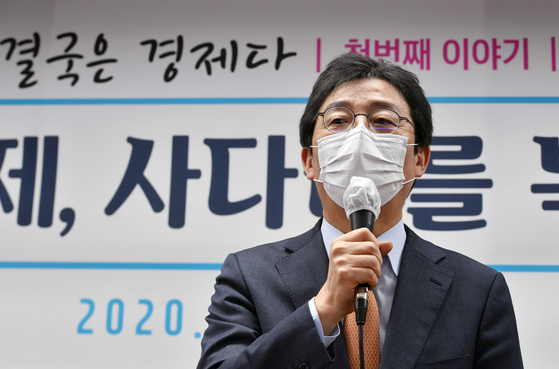 Former lawmaker and presidential hopeful Yoo Seong-min speaks at a ceremony to launch his new office in Yeouido, western Seoul, on Monday. [YONHAP]


Yoo Seong-min, a former four-term conservative lawmaker from Daegu, jumped back into the political game Monday with an eye on a presidential bid in 2022.

The former economist’s return to Yeouido, the island in western Seoul where the National Assembly sits, after his decision in April to not run for a fifth term representing Daegu’s Dong District, was formalized with the opening of his new office, suggestively named “Hope 22.”

To commemorate the opening, Yoo hosted a forum on the state of the real estate market, using the occasion to slam the Moon Jae-in administration for its handling of it and the economy in general.

Yoo’s return to politics was a welcome development for the main opposition People Power Party (PPP), which for years has been looking for figures to run in 2022’s presidential race.

Suggestive of this sentiment was the presence of dozens of PPP lawmakers at the event Monday, led by Kim Chong-in, the PPP’s interim chairman.

For months Kim has been calling on conservative heavyweights — both active and retired — to help the party challenge the ruling Democratic Party (DP) in next year’s by-elections for Seoul and Busan mayors, as well as the presidential race after.

Yoo’s reputation is mixed among conservative voters, however.

For some, he is seen as an ideal candidate to challenge the Moon administration’s economic record, given his background as an economist in the country’s leading government think tank, the Korea Development Institute.

Demonstrating he is well aware of this strength, Yoo on Monday called the economy the “central issue” in 2022’s presidential election, while accusing the liberal government of failing to keep people’s pocketbooks full.

For other conservatives in the country, particularly those who supported former President Park Geun-hye, Yoo is viewed with deep mistrust.

Yoo’s vote in favor of Park’s impeachment after a massive corruption scandal in 2016 led to his branding as a turncoat among the PPP’s conservative base.

After leaving the party in a schism that fractured the PPP’s antecedent, the Saenuri Party, in two, Yoo and his faction attempted to forge an alternative to the party, but failed after three different political experiments ended in disappointment.

What eventually healed that conservative schism — at least on the surface — was the electoral successes of the ruling DP.

After quietly returning to the main opposition PPP last year, Yoo and his allies may have been encouraged by the fact that many political rivals were routed by the DP’s landslide victory in April’s general election.

For now, eyes are on whether the presidential hopeful will submit to growing pressure in the party calling for him to run for Seoul mayor in next year’s by-election. Many in the party feel his popularity among younger voters makes him a strong candidate.

Yoo has been resisting such calls, with some of his allies saying the proposals are attempts by Yoo’s opponents in the PPP to sideline him from the presidential race.