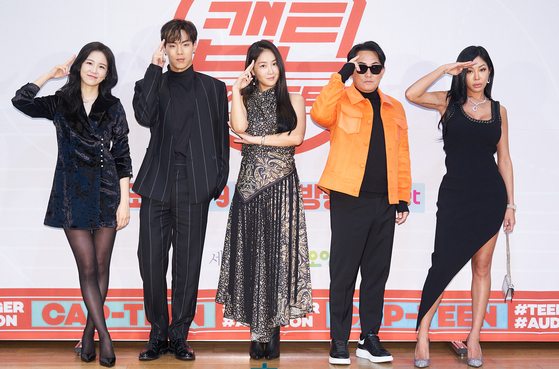 
K-pop auditions have always centered around the contestants and their struggles to achieve their dreams, but Mnet hopes to change that with its latest series.

The cable channel's upcoming audition program "Cap-Teen" hopes to provide the best consulting service for those wishing to make it big on the K-pop scene. By comparing the K-pop audition process to the college entrance exam, the show will provide guidelines for teenagers dreaming of K-pop stardom and their parents.

“There had been a lot of audition programs in the past, but there wasn’t any show where the teenagers were evaluated along with their parents,” Kwon Young-chan, chief producer of the show, said during an online press conference on Thursday. “'Cap-Teen' is designed to show aspiring teenagers fighting to become world-famous K-pop stars and the parents of the contestants offering support."

The main judge of the show will be veteran singer Lee Seung-chul, who is already familiar to the public as an audition program judge thanks to his six-year career on Mnet’s first-generation audition program “Superstar K.” Singer Soyou, rapper Jessi, and Shownu of boy band Monsta X will round out the judging panel.

Singer Soyou said the best part of the show is how the parents get to see their children improve throughout the rounds.

"It felt completely fresh to hold an audition program for teenagers where their parents are by their side,” Soyou said. “When I used to be a teenager trying out for auditions, I could never tell my parents until I passed. But I think it’s great to see the parents cheering for their children from the beginning.”

“I said I would go hard on them,” Jessi said. “I never got a compliment when I was a kid, but I think that’s how I grew up to be a strong person, so I think it is necessary.”

Despite controversy about vote rigging on the “Produce 101" series aired on Mnet, producer Kwon emphasized that the votes collected for “Cap-Teen” would be fairly monitored, but did not mention specific details about that process.

"Our program will also collect votes in the final round, which will be thoroughly monitored. Since last year, Mnet has introduced a new system in which outsiders who are not associated with our program observe the whole process of counting the votes.”