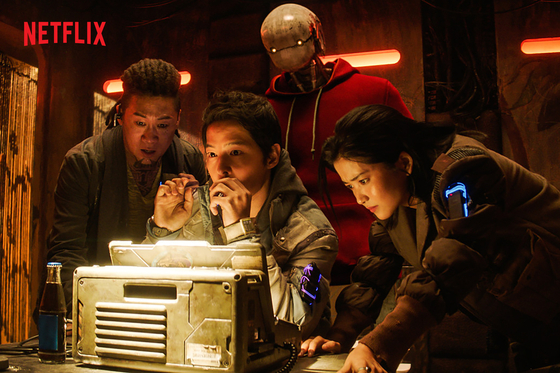 
The first Korean sci-fi film set in space, “Space Sweepers,” will be made available to audiences worldwide through the global streaming platform Netflix, the over-the-top (OTT) giant confirmed on Friday.

The film, one of the most highly anticipated of the year, features a star-studded cast including Song Joong-ki, Kim Tae-ri, Jin Seon-kyu and Yoo Hae-jin. The quartet feature as space pirates who discover a humanoid robot called “Dorothy” which was created as a weapon of mass destruction.

The film was initially set for a theatrical release during the summer but pushed back its premiere several times as daily coronavirus cases continued to fluctuate.

“'Space Sweepers' is a film that was created on the premise that its IP universe will be expanded to other various content such as webtoons and games,” said CEO Yoo Jung-hoon of local distributor Merry Christmas in an official statement through Netflix.

“But we cannot rule out the current Covid-19 pandemic […] and decided that we cannot put off the film premiere any longer. So, in order for successful follow-up expansion of the IP, we chose Netflix to present our film most successfully not only to local but international audiences as well.”

The sci-fi film is the third to directly head to the global streaming platform this year, after “Time to Hunt” and “The Call,” set to premiere on Nov. 27. Netflix did not yet specify the exact release date of the film.