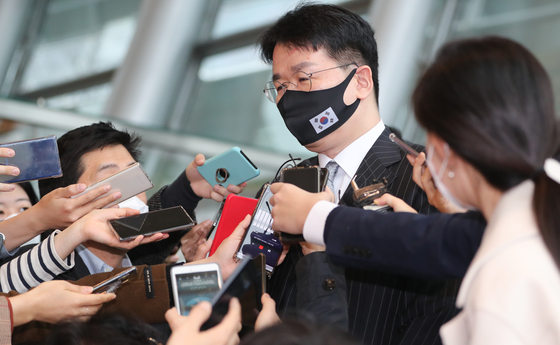 
Korea’s grand plan for a mega flag carrier is hitting more roadblocks, with regulators frontloading scrutiny and already saying that the proposed entity might run afoul of competition law.

FTC “will thoroughly examine whether [the acquisition] limits competition based on principles and laws,” she added.

Based on 2019 figures, the combined entity would control 62.5 percent of the domestic market, if related low-cost carriers are included. Jin Air is 60 percent owned by Hanjin KAL, which owns 29.27 percent of Korean Air Lines, while Asiana Airlines owns 44.17 percent Air Busan and 100 percent of Air Seoul.

“Usually, analysis on the impact, like limits on competition and revival impossibility [of the acquired firm], are examined after a case has been registered, but basic matters are being looked over beforehand,” an FTC spokesperson told Yonhap Sunday.
The FTC has already started to review combined revenue, market share and debt ratio of the two carriers.

In the complex and controversial transaction announced Nov. 16, state-owned Korea Development Bank (KDB) will invest 800 billion won ($718 million) in Hanjin KAL, which will buy shares of Korean Air Lines, which will in turn acquire a controlling interest in Asiana Airlines.

Revenue for the combined entity is estimated at 15 trillion won. It will become the world’s No. 7 carrier by passenger and cargo capacity, according to 2019  International Air Transport Association numbers provided by KDB.

“When damage could be caused by a monopoly, fair trade law is applied. Usually, [a business combination] is evaluated for a wide range of possible damages,” Joh said.

Korea Corporate Governance Improvement (KCGI), Hanjin KAL’s largest shareholder, has already objected to the transaction. It filed for an injunction against the issuance of new shares to KDB on Wednesday.

KCGI argued that the ownership stakes of existing shareholders will be diluted and that the acquisition is just an attempt by Hanjin KAL Chairman Cho Won-tae to maintain control over Hanjin KAL and Korean Air Lines.

KCGI and its allies, which own about 46 percent of Hanjin KAL’s stock, are reported to have raised funding, which could be used to buy more shares in Hanjin KAL.

Grace Holdings, a subsidiary of KCGI, recently borrowed 130 billion won, according to local media reports. It struck a deal with Meritz Securities on Nov. 12 to take out a loan collateralized by 5.5 million shares in Hanjin KAL.