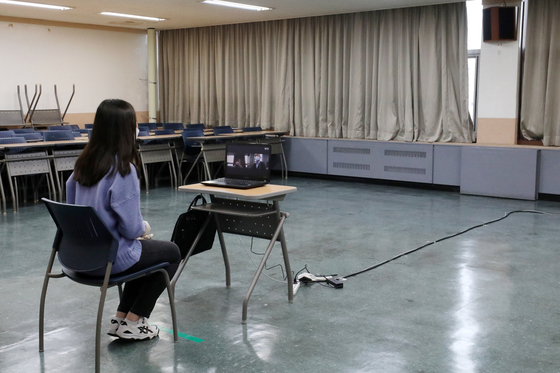 A student sits for a virtual interview for early admissions at the Hankuk University of Foreign Studies in eastern Seoul on Sunday. [NEWS1]


Starting Tuesday, meetings involving 100 people or more will be banned in the greater Seoul area as the social distancing recommendation is heightened to Level 2, the health minister announced Sunday.

“Starting Nov. 24, Level 2 social distancing measures will be enforced in the greater Seoul area and Level 1.5 measures in the Honam region [North and South Jeolla and Gwangju],” Minister of Health and Welfare Park Neung-hoo said in a press briefing Sunday. “We have reached these decisions because the nation needs to take pre-emptive actions to curb the current speed of outbreaks, especially as we reach the date of the national college entrance exam.”

At Level 2 social distancing, any events involving 100 people or more will be prohibited, while nightclubs and bars that allow dancing will be forced to shut down. Restaurants won’t be allowed to receive customers after 9 p.m., but takeout will be allowed. Cafes can serve takeout only at all hours. These restrictions will be enforced in Seoul, Gyeonggi and Incheon.

At Level 1.5 in North and South Jeolla and Gwangju, some facilities such as churches will be obligated to limit the number of congregants allowed into their buildings, while events involving 100 people or more can be banned.

Korea runs a five-level social distancing recommendation system — Levels 1, 1.5, 2, 2.5 and 3 — with each level having different guidelines and rules. The country is divided into seven zones and different levels are recommended per zone depending on its Covid-19 numbers.

The raising of the level from 1.5 to 2 in the greater Seoul area will go into effect just five days after the recommendation was raised from 1 to 1.5 last Thursday.

For the greater Seoul area to be upgraded from Level 1.5 to Level 2, there should have been an average of 200 patients or more in Seoul, Incheon and Gyeonggi combined per day over a two-week period.

Whilst this did not take place, Park said that the average number of cases per day last week was 255.6 throughout the nation, more than twice that of the week before, and that the government decided to act preemptively for the sake of college entrance exam takers.

The once-a-year college entrance exam, which largely determines a student’s admittance to university in Korea, takes place on Dec. 3 this year. Over 490,000 students are to take the exam, according to the Korea Institute for Curriculum and Examination, the administrator of the test.

The heightened social distancing recommendations will be in place for the next two weeks. 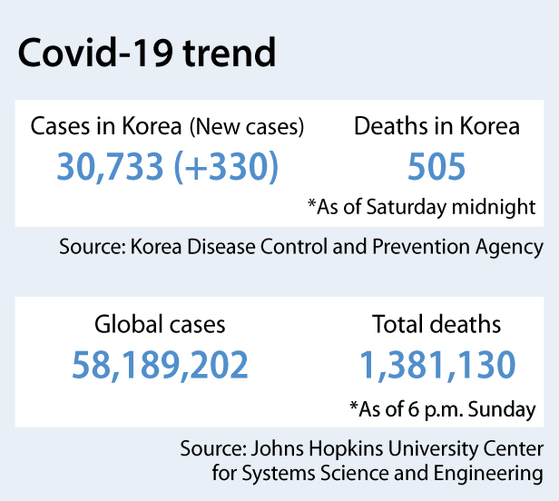 Clusters of outbreaks throughout the nation have involved schools, nursing homes and meetings of friends and families.

In Gangwon, a nursing home for the elderly in Sokcho produced nine cases, which led to a cluster of 25 cases traced to a kids’ cafe in Yongin, Gyeonggi, as of Sunday; a nursing home for people with disabilities in Cheorwon County added eight cases from Saturday to Sunday, bringing its tally to 48.

In Hwaseong, Gyeonggi, a manufacturing company added 13 cases from Saturday to Sunday, bringing its tally to 14.

In Iksan, North Jeolla, a hospital added 12 cases from Saturday to Sunday, bringing its tally to 26.

The Health Ministry in a briefing Friday said that the nation may be coming under a third wave of infections after the first in mid-February and the second in mid-August.