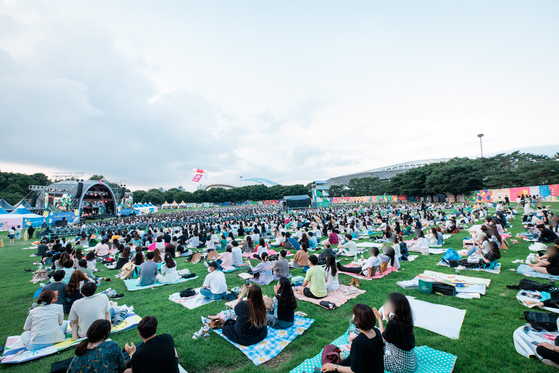 Festivalgoers at The Beautiful Mint Life 2021 music festival watch performances on picnic mats Saturday at Olympic Park in southern Seoul. The Beautiful Mint Life 2021 is Korea's first large-scale outdoor music festival to be held in a year and eight months since the Covid-19 pandemic broke out early last year. All visitors must use a self-testing kit to help ensure they do not have the virus. [NEWS1]


Starting July 1, the Seoul metropolitan area will allow private meetings of up to six people and restaurants and bars to stay open until midnight.

Most other regions will allow gatherings of up to eight people and will have no limits on businesses hours. Limits on gatherings for all regions are set to gradually be expanded after a two-week trial.

Prime Minister Kim Boo-kyum announced Sunday that the capital area will be under Level 2 of the revamped four-tier scheme, while the other areas of the country will be under Level 1 — allowing businesses to extend operating hours and easing restrictions on social gatherings from July.

The capital area, including Seoul, Gyeonggi and Incheon, under the new Level 2 guidelines will raise the limit on private gatherings from four people to six people, for two weeks, and there will be no restrictions on immediate family gatherings. The ban will then be further eased to allow up to eight people.

Restaurants, cafes, bars and noraebang (singing rooms) will be allowed to stay open until midnight, while hostess bars and nightclubs with dancing will be allowed to resume business. Currently, restaurants and cafes are allowed to run only until 10 p.m., while the operations of nightlife venues are suspended. All other businesses, such as movie theaters, PC rooms, hagwon (cram schools) and discount stores, will have curfews completely lifted.

The majority of the country will be under Level 1, where private gatherings of up to eight people will be allowed and there won’t be any business curfews as long as a distance of at least 1 meter (3 feet) is kept between each seat. The limit on gatherings is planned to be completely lifted after two weeks.

South Chungcheong, however, will have no cap on social gatherings straight from July 1.

Jeju Island, Korea's most popular holiday destination, will only allow six people for gatherings in the first two weeks in July, like the greater Seoul area.

Daegu will announce its own plan this upcoming Tuesday.

After a two-week trial period, each local government will be able to tweak its distancing measures depending on the virus situation.

“Please refrain from having large gatherings or hoesik [after-work dinners], and please make sure to wear masks not only indoors but also outdoors such as in stadiums, markets and amusement parks even if you are vaccinated,” Kim added.

Looming over the country's plans to implement eased virus restrictions this week, Korea’s daily number of infections hovered in the 600s for the fifth consecutive day — although Sundays’ figures are usually lower due to fewer tests conducted over the weekend.

A cluster of infections tied to foreign teachers at English-language cram schools in several cities in Gyeonggi increased to 109 in a week.

Six foreign English teachers at five different English cram schools in Seongnam, Bucheon, Goyang and Uijeongbu violated the distancing rules and mingled at a bar in Seoul on June 19, and later all tested positive.

The infections spread to other students and their families, of which most of them are kindergartners or younger elementary school students.

Authorities advised all instructors at foreign language cram schools in Gyeonggi, estimated to be around 3,000, take a Covid-19 PCR test, and switched nearby schools to online classes. 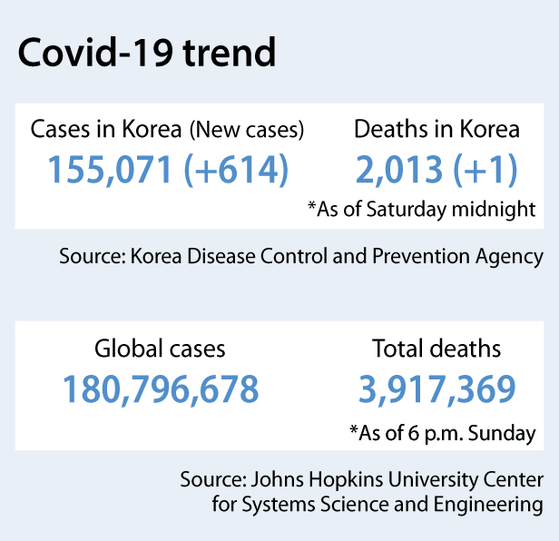 Officials in Chuncheon, Gangwon, raised its social distancing level to Level 2 from Saturday through the end of the month, as virus infections continued from a discount store.

Goyang City in Gyeonggi banned all noraebang for a week, from Saturday to July 2, after a series of infections continues to grow. Anyone violating the rule will be charged with a fine, and the business where an infection breaks out will also be charged for quarantine costs.