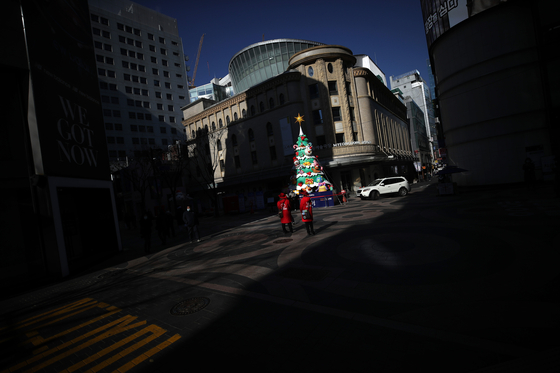 
The Seoul Metropolitan Government announced Monday it was instituting its own emergency measures to curtail an alarming spread of Covid-19 in recent weeks, including cutting back on late-night public transportation.

To enforce the central government’s Level 2 social distancing recommendation across the greater Seoul area announced a day earlier, the capital city will be cutting down on the bus and train services after 10 p.m. by 20 percent, said Acting Seoul Mayor Seo Jung-hyup in an online briefing.

The measures will be enforced on buses starting Tuesday, while subway operation hours will be reduced starting Friday after public announcements are made.


All public rallies of 10 or more people will be banned starting Tuesday midnight until further notice, the city announced.


Should these measures fail to curb the spread of the coronavirus in the near term, the city plans to stop subways at 11 p.m. Subway times were shortened in April, to midnight from 1 a.m.

Seoul officials said they plan special measures to ensure the safety of the upcoming national university entrance exam, which takes place on Dec. 3.


Seo urged churches and other religious institutions across the city to carry services online and prevent large gatherings. That recommendation was a step up from Level 2 social distancing measures, which require reducing the number of people at services by 20 percent.


At Level 2 social distancing — the third highest level of the government’s five-tier system — any event involving 100 people or more will be prohibited, while nightclubs and bars that allow dancing will be forced to shut down. Restaurants won’t be allowed to serve customers after 9 p.m., but takeout will be allowed. Cafes can operate normal hours but only serve takeout.

People are not allowed to visit hospitals and care centers catering to the elderly, nor will patients be allowed to exit the premises. Such facilities have been especially vulnerable to cluster outbreaks since the pandemic's onset.

On Sunday, Korea added 271 coronavirus cases, a significant step down from the 386 recorded a day earlier. That brought the total number of infections in the country to 31,004, according to the Korea Disease Control and Prevention Agency (KDCA).


The lower number of infections Sunday was partially due to the fact that fewer people get tested over the weekend, as was seen in past weeks.


KDCA Commissioner Jeong Eun-kyeong stressed the country remained at high risk of mass contagion on a nationwide scale owing to increased person-to-person contact as the year draws to a close.

Particularly alarming is the increasing rate of infection among people in their 20s, who accounted for only 10.6 percent around two months ago, but last week made up 17.8 percent of all Covid-19 cases, Jeong added.


The silver lining to the commissioner’s grim outlook for the rest of 2020 was her optimistic view on the distribution of vaccines by the end of the year.

Korea’s talks with foreign drug makers who have developed promising vaccines have proceeded smoothly, she said, noting that contracts are being reviewed with some companies. Health Minister Park Neung-hoo also noted last week talks are taking place with U.S. drug companies Pfizer and Moderna, both of which have reported their vaccines showed efficacy rates of around 95 percent.


“We will be able to obtain vaccines sufficient for around 30 million people through individual contracts by the end of the year,” Jeong added.