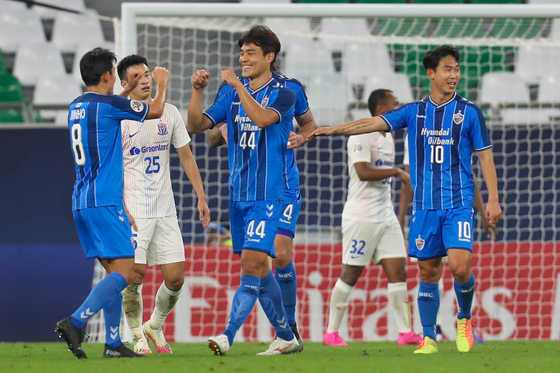 
After finishing as runner-up in both the 2020 K League 1 season standings and the FA Cup, Ulsan Hyundai FC may finally have the edge over old rivals Jeonbuk Hyundai Motors FC at the AFC Champions League.

With two games played, Ulsan are at the top of Group F with one win and one draw, beating second-place FC Tokyo on goal difference. Ulsan picked up a resounding 3-1 win over Shanghai Shenhua FC on Saturday to take the top spot with four games still to play in the group stage.

Jeonbuk, which beat Ulsan to both the K League 1 and FA Cup titles this year, are having a more difficult time in Group H.

With three games played, Jeonbuk have failed to pick up a single win and are now trailing in third place with a draw and two losses, following a 2-1 loss to Shanghai SIPG FC on Sunday. Jeonbuk only have three games left and are only holding on to third place on goal difference, with the fourth-place Sydney FC having conceded three more goals so far.

Trailing five points behind the No. 1 Yokohama F. Marinos and No. 2 Shanghai, Jeonbuk will probably need to win at least two of their remaining games to stay in the competition. This comes as a big blow for the North Jeolla side, which was hoping to become the first team in Korean history to pull off the “treble,” or winning all three major competitions in the same year.

This year’s AFC Champions League was interrupted by the outbreak of the Covid-19 pandemic. The contest started in February, but the schedule was put on hold after just a few games.

Groups A, B, C and D resumed play in September, completing their group stages and going on to play a split knockout round. With the quarterfinals and semifinal already completed for the top groups, Persepolis FC of Iran has made it through to the final and is waiting for an opponent.

Groups E, F, G and H, which include all Korean teams, resumed play over the weekend and will continue with their group stages over the next few weeks before moving to the Round of 16 in early December, before moving through the quarterfinals and semifinal ahead of the final on Dec. 19. All of the games are being played in a bubble in Qatar.

Looking at the other teams that have made it through to the group stages, FC Seoul is currently in second place in Group E with one win and one loss, three points behind group leader Beijing FC. The Suwon Samsung Bluewings are trailing at the bottom of Group G with one draw and one loss.

FC Seoul will be back on action on Tuesday, facing Thailand’s Chiangrai United, while Ulsan Hyundai FC will also be playing on the same day against Australia’s Perth Glory. Both games will start at 10 p.m. Korea time.