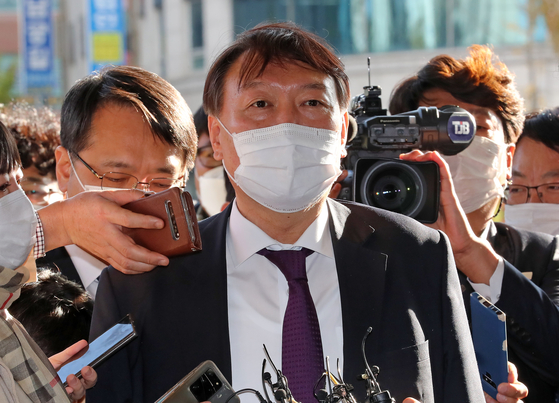 In this file photo, Prosecutor General Yoon Seok-youl enters the Daejeon District Prosecutors' Office to meet with prosecutors on Oct. 29, 2020. He resumed the regional tour of prosecutorial offices after eight months. [YONHAP]

The prosecution, however, dismissed a complaint that Yoon had abused his power to let her off the hook when the nursing home she invested in was cited for violating medical laws in 2013.

The Seoul Central District Prosecutors’ Office indicted the 74-year-old woman, whose surname is Choi, on charges of violating the Medical Service Act and fraud. Prosecutors have not released Choi's full name.

According to the indictment, Choi established a medical foundation with business partners and spent 200 million won ($180,000) to open a nursing hospital in Paju, Gyeonggi, in November 2012. Despite the facility being registered as a nursing home rather than a nursing hospital — and therefore not governed by the Medical Service Act — it received about 2.29 billion won from the National Health Insurance Service over a span of two years beginning in May 2013, according to prosecutors.

Choi’s three business partners were later indicted and convicted in March 2017, but Choi faced no criminal investigation. The prosecutors at the time said she had signed an official agreement in May 2014 that granted her legal immunity when she stepped down as the foundation’s director.

Prosecutors cleared Yoon of allegations that he had abused his power to protect Choi, and also dismissed a criminal complaint that Yoon’s wife had forged a bank statement for her mother.

The prosecution has been conducting several probes into Yoon and his family. Last month, Justice Minister Choo Mi-ae ordered Yoon to stay away from the investigations, and Yoon’s office replied that the order changed nothing because Yoon was already keeping a distance from the probes.

The Seoul Central District Prosecutors’ Office is also investigating allegations that Yoon and Kim took bribes. Kim, who married Yoon in 2012, has denied the allegation.

In September, a liberal civic group filed a criminal complaint against the couple. Kim's company, Covana Contents, hosted an art exhibition in June 2019 and four big companies originally agreed to sponsor the event. Once Yoon was nominated as prosecutor general the following year, 12 more companies signed on as sponsors.

The civic group argued that the sponsorships amounted to bribes.

Earlier this month, prosecutors obtained tax records of Kim's company from the National Tax Service, after a court rejected their applications for warrants to raid Kim’s company and the event sponsors.

The prosecution is also looking into an allegation that Kim was involved in manipulation of the stock price of Deutsch Motors, a locally listed company that imports cars, from 2010 to 2011.

The indictment of Yoon's mother-in-law came as Yoon has begun resuming his public activities to communicate with rank-and-file prosecutors amid a bitter power struggle with Justice Minister Choo. Yoon's popularity is also rising as a potential presidential frontrunner after he hinted at a political future once his term ends next year.