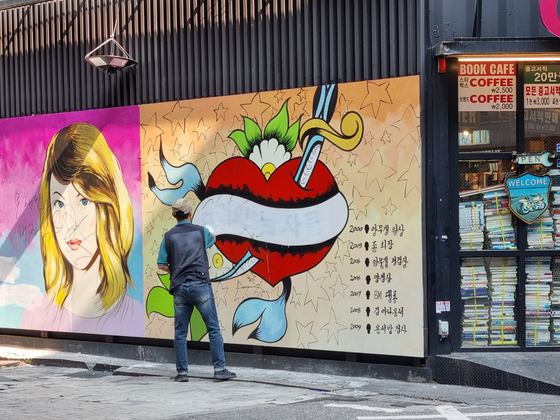 A provocative mural on the wall of a bookstore in central Seoul, aimed at disgracing the wife of former Prosecutor General Yoon Seok-youl, frontrunner among presidential candidates, is being erased by an employee of the bookstore. [JO HAE-UN]

PARK JIN-SEOK
The author is a social editor of the JoongAng Ilbo.

“Dad, look here! There are cows,” cried an 8-year-old girl in the Altamira Caves in northern Spain. Marcelino Sanz de Sautuola looked up and found paintings of various animals, including bison and deer, on the walls and ceiling of the cave. It was the moment when one of the earliest murals of humanity, estimated to be drawn 25,000 years ago, were discovered.

Murals are different from personal artwork on sketchbooks and canvases, as they are inherently a medium to convey messages to the public. The cave murals in Altamira and Chauvet, France, painted by distant ancestors of humans are interpreted as animal worship and praying for fertility.

After the creation of religions and classes, murals become larger and more decorative. Masterpieces based on Christian scriptures, such as Michelangelo’s “The Last Judgment” and Leonardo da Vinci’s “The Last Supper,” adorn the walls of churches in Europe. The “Procession of Princes” in Dresden, Germany, is a mural depicting the local monarchs for 700 years on a 101-meter (331-foot)-long wall, a symbolic artwork showing off the power of the ruling class.

In the East, it is not hard to find masterpieces of Buddhist paintings such as the “Thousand Buddha Grottos” in the Mogao Caves in Dunhuang, China, and the Goguryeo mural caves vividly depicting admiration for Buddhism, Taoism and the unknown afterlife.

In the post-religion and post-class society, murals developed in various forms. The mural movement in Mexico in the 1920s and the drawings of Che Guevara appearing on the streets of Cuba represent murals as a means of propaganda and agitation. Graffiti in the U.S. had once been treated as vandalism by rogue teenagers, but they were integrated into the world of art as they convey various social message after Jean Michel Basquiat and Keith Haring.

But a master may not have been satisfied with tens of thousands of years of development. Pablo Picasso once said, “After Altamira, all is decadence.” It at least applies to the so-called Julie murals on the wall of a bookstore in downtown Seoul in the summer of 2021, aside from the argument on whether the crude product of human rights violation and defamation can be called a mural.