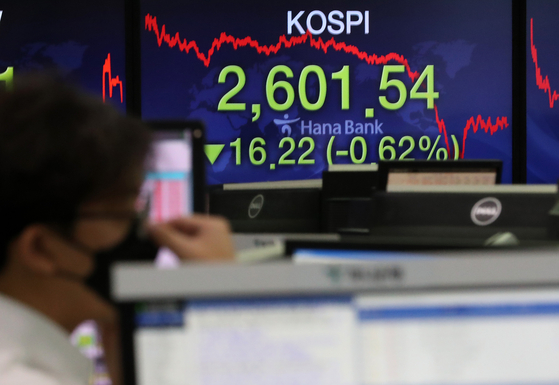 A screen shows the final figure for the Kospi in a dealing room in Hana Bank in Jung Distrct, central Seoul, on Wednesday. [NEWS1]

Stocks ended a five-session winning streak Wednesday after hitting an all-time high the previous session, as investors dumped local stocks to lock in gains. The won rose against the dollar.

But stocks switched to losses in the early afternoon on profit-taking. Analysts attributed the shift mainly to foreign selling.

Foreigners extended their buying spree for a 15th straight session — the longest since the 19-session streak that ended in August 2016 — but their daily buying has narrowed every session this week.

"Foreigners' aggressiveness and the longevity of their buying spree seem to have become increasingly important to the local stock markets," Kiwoom Securities analyst Seo Sang-young said.


Pharmaceutical firm Samsung Biologics edged up 0.12 percent to 803,000 won. Celltrion spiked 9.45 percent to 330,000 won, following reports that the company is about to file for conditional approval for its antibody treatment CT-P59.

The local currency closed at 1,108.9 won per dollar, down 3.8 won from the previous session's close.