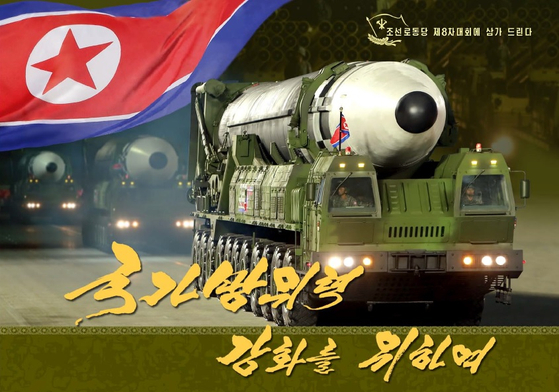 The 120-page photo collection, titled “For the Strengthening of National Defense,” was uploaded online in its entirety by its North-based publisher, the Foreign Languages Publishing House.

Noting that a strong national defense is the “foundation of a country’s existence,” the introduction to the book claimed, translated from Korean, that North Korea had achieved “breakthrough advances” in developing a defense capacity sufficient to safeguard its “independence and survival.”

The high-resolution photographs in the book largely featured Kim during his guidance visits to military bases and supervising major weapons tests.

Launch of the Hwasong-15 ICBM depicted in the photo book. [SCREEN CAPTURE]


Prominently displayed are launch scenes from several of the regime’s key weapons tests undertaken since Kim came to power in December 2011.

The book includes photos of short-range ballistic missile tests conducted throughout mid-2019 through early this year — actions widely regarded as attempts at low-level provocations toward the United States amid a persistent stalemate in denuclearization negotiations.

Those tests, however, are also credited by outside experts for significantly advancing the regime’s conventional strike capabilities, and therefore enhancing the threat the North posed to its immediate neighbors in South Korea and Japan.

The highlights of the publication are photographs of the regime’s intercontinental ballistic missiles (ICBM), the regime's main objects of global scrutiny. In an apparently doctored photograph of the test launch of its most advanced ICBM, the Hwasong-15, on Nov. 29, 2017, the caption read: “complete success.”

The second half of the book consisted entirely of photographs taken from the North’s grandiose military parade last month, held in commemoration of the ruling Workers’ Party’s 75th anniversary.


During the event, Pyongyang unveiled several never-before-seen weapons, including an apparently enlarged version of the Hwasong-15 as well as what appeared to be new submarine-launched ballistic missiles, named Pukkuksong-4A.

International experts also honed in on the diverse array of launching vehicles used to carry the different types of missiles in the parade. They noted that the regime’s ability to domestically produce such vehicles is indicative of just how far its arms production capacity has come.

A South Korean government official, who asked not to named, said while the photo book did not feature any new weapons from the regime, its publication may be aimed at touting the country's national security successes ahead of an important party convention in January.

Pyongyang’s Foreign Languages Publishing House specializes in publishing foreign-language documents, and is modeled on a Soviet counterpart. The company is believed to be directly controlled by the Propaganda and Agitation Department, which is the central propaganda arm of the regime and is effectively run by Kim Yo-jong, the younger sister to North Korean leader Kim Jong-un.