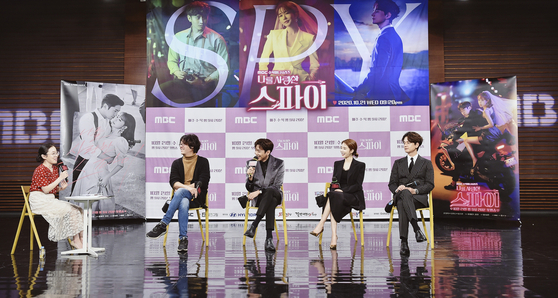 Actors for MBC drama ″The Spies Who Loved Me″ at an online press conference to announce the start of the drama in October. [MBC]


MBC drama “The Spies Who Loved Me” is now back on track to resume filming, after the set was shut down on Nov. 24 due to worries over a spread of the coronavirus. An actor with a minor role was reported to have crossed paths with another actor who was confirmed to be infected.

Those who were exposed were all tested, and some crew members had to self-quarantine. The team says everyone involved has since tested negative and are ready to return to set.

JTBC’s new drama “Snowdrop,” which also found itself in a similar situation, will also resume filming. The drama is set to air next year.

Another upcoming drama on KBS, whose title can be translated to “The River Where the Moon Rises,” is also reportedly set to resume its filming after an actor tested positive for Covid. The KBS drama is also scheduled to air early next year.