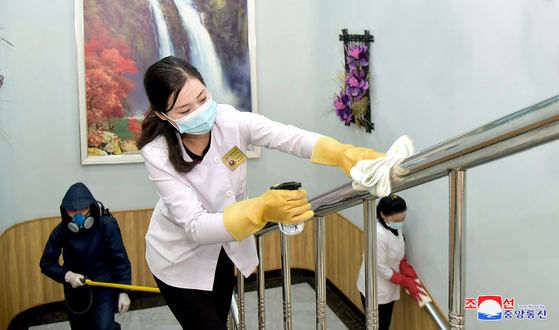 
North Korea strengthened its internal blockade against the coronavirus by beefing up controls at the inter-Korean border and around its coast amid a dangerous surge in cases globally, state media reported Sunday.

According to regime mouthpiece the Korean Central News Agency (KCNA), a “blockade wall is being firmly built across the border and military demarcation line” while maritime patrols are strictly monitoring coastal activities for any potential contaminants.

“Units responsible for treating imported products are disinfecting thoroughly in accordance with the type of product, material and form of packaging, while workers are regularly submitted to health checks,” the KCNA added.

The measures appear to be a step up from the anti-viral lockdown North Korea has been imposing since January to keep the coronavirus from overwhelming its outdated health care system.

Though the regime continues to claim it has had no Covid-19 cases on its soil thanks to such measures, the blockade has only intensified over the course of the year as Pyongyang grappled with a series of suspicious cases.

The results of these intense controls have been disastrous for the country’s frail economy already battered by international sanctions over its nuclear program and several natural disasters over the summer.

The mounting pressures of eking out some semblance of economic achievement by January next year, when a major party congress is due to be held, appears to be prompting “irrational responses” from North Korean leader Kim Jong-un, according to South Korea’s spy agency, the National Intelligence Service (NIS).

NIS officials told South Korean lawmakers Friday that Kim last month ordered the execution of an influential currency trader in Pyongyang due to a precipitous drop in the exchange rate of 20 percent. In August, he also ordered the killing of a top official who violated Covid-19 import restrictions, the NIS said.

Early this month the regime blocked imports from abroad through the cities of Hyesan, Rason, Nampo and, more recently, the capital of Pyongyang, testifying to just how dire the economic situation is mounting up to amid the pandemic, intelligence officials added.

Prices for basic commodities have also been surging in the country. The NIS said items like sugar or other condiments have approximately quadrupled as a result of the restrictions on trade with China.

According to Rep. Ha Tae-keung, a South Korean opposition lawmaker who received the NIS briefing, Pyongyang is also refusing outside help to cope with the crisis over fears of contamination.

Approximately 110,000 tons of rice that Beijing agreed to give the regime as aid is currently sitting idle in the port of Dalian, China, because the North does not want to bring it across its borders, Ha said.