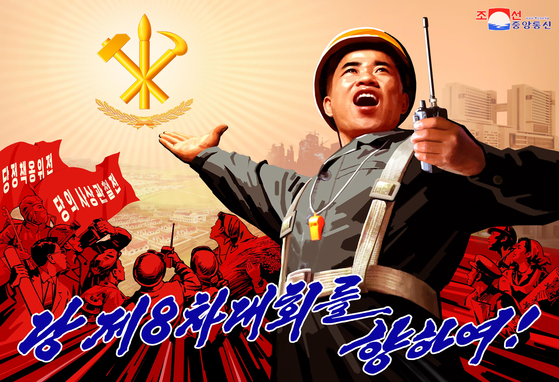 A propaganda poster issued by North Korea in October promoting solidarity and ideological loyalty ahead of the eighth Workers' Party Congress scheduled for early January. [YONHAP]

No announcement was made on the specific dates for the event, the first nationwide party gathering to take place since 2016. But it’s expected to be held between Jan. 1 and around Kim’s birthday on Jan. 8.

According to the regime mouthpiece Korean Central News Agency (KCNA), Kim and members of the political bureau of the party’s central committee on Tuesday examined and approved agendas for the congress, alongside other preparations.

The meeting also confirmed that delegates elected “at all levels” of the party’s organization nationwide will take part in the event.

The one item certain to be ratified at the event is a new five-year economic plan, which Kim hinted at in August during a rare admission of failure in meeting the country’s growth goals this year.

The acknowledgement — and the decision to hold such a rare event just five years after the last — testified to the regime’s sense of alarm amid the biggest crisis to hit North Korea’s frail economy since the late 1990s.

By comparison, there was a 36-year gap between the sixth and seventh congresses.

Further underscoring the importance placed on the coming event was the 80-day “battle” the country concluded on Wednesday, part of an effort to eke out some positive economic results before the congress opens.

The Politburo “appreciated that innovative achievements and progress were made in all fields” throughout the campaign thanks to the “exceptional political enthusiasm” of the public, the KCNA said, though the report was mum on details of such successes.

Perhaps of greater interest to its neighbors and the United States regarding the upcoming congress is whether the regime will announce any major changes to its foreign policy.

Pyongyang’s denuclearization negotiations with the Donald Trump administration have all but flopped in the last two years, despite three high-profile summits between the two leaders.

The turnover in the White House last month has made the prospects of continuing talks in the same vein unlikely, and some analysts expect the North to carry out a provocation of some sort to pressure incoming President Joe Biden.

In the lead-up to the event, North Korea beefed up its virus restrictions to nearly the highest levels, particularly at its border with China.

According to Radio Free Asia (RFA), which quoted a source from the North’s Ryanggang Province, guards from the country’s State Security Department have been mounting inspections on citizens in the area, a measure that together with a 6 p.m. curfew in border areas has almost completely eliminated public activities.

The patrols have especially targeted those with access to cellphones used to communicate with China and South Korea, possibly in an effort to prevent internal secrets in the country from being leaked abroad, RFA said.

Brokers who made money connecting North Korean defectors to their families back home have gone silent, worsening the situation for those dependent on remittances from family resettled in the South.