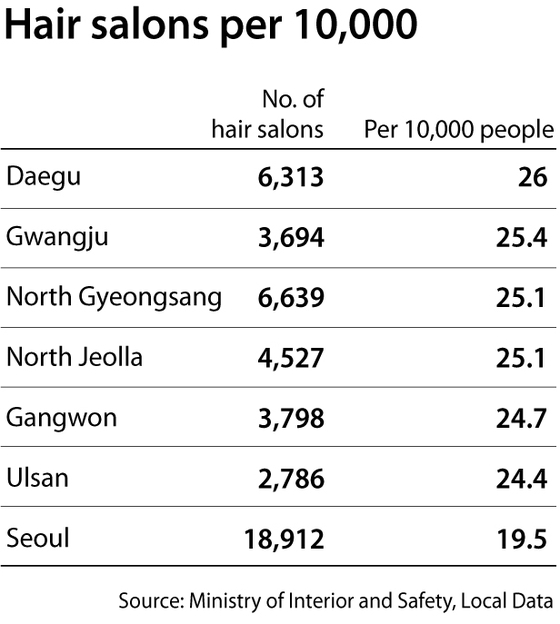 This is one of the findings detailed in a report published by KB Financial Group Research Institute analyzing the current status of self-employed businesses.

According to the report, Korea has 110,179 hair salons as of September. That’s up 28 percent compared to 10 years ago. The number has been growing steadily since 2010, but the rate of increase has been slowing since 2014.

The United States only has two hair salons per 10,000 people.

The report said not many people are interested in opening hair salons these days as competition is intense and the market is saturated.

“Running a hair salon is one of the jobs that already has enough supply, so it is quite difficult for people to [open a new one],” Oh Sang-yeob, a researcher at KB Financial Group Research Institute, said. “In the past, hairstylists preferred opening their own salons. But these days where lots of franchise hair salons are gaining popularity from customers, they tend to belong to a franchise salon and build career within a company’s system.”

Hair salons have been doing relatively well through the Covid-19 pandemic largely because labor and material costs are low. About 4,809 hair salons went out of business during the January-to-September period last year, but that number was only 3,947 during the same period this year, according to the report.

“As hair salons have low fixed costs compared to other businesses, a relatively low number of salons ended up going out of business amid the pandemic,” Oh said. “However if the pandemic continues, they also have no other choice but to close business.”

Three out of 10 hair salons in Korea have at least 10 years of history. The hair salon that has the longest history in the country is Soo Jin Hair Salon in Jungnang District, eastern Seoul. It has been running since 1900.

Sales of hair salons are quite low compared to other businesses.

“Franchise hair salons are expected to grow further with their quality talent based on high brand awareness,” said Oh.