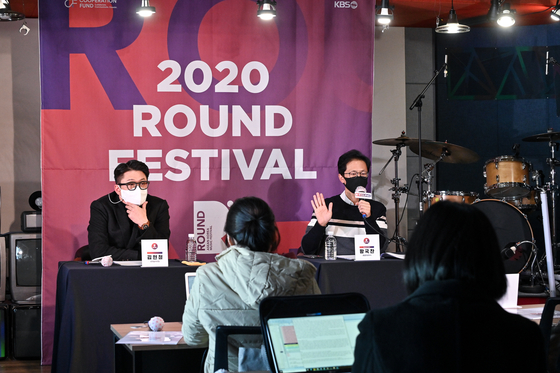 Veteran singer and producer Kim Hyun-chul (left) and Hwang Gook-chan, the chief producer of the festival at the press event for Round 2020 held in Mapo District, western Seoul, on Monday. [ROUND 2020 ORGANIZING COMMITTEE]


The Asean-Korea Cooperation Fund’s first music festival dubbed “Round 2020” will be broadcast live through YouTube on Dec. 6, in the hopes of exchanging culture and strengthening ties between the Asean nations and Korea.

A total of 20 artists will perform — 10 of the best bands in Korea, such as Daybreak and Soran, and 10 artists from the 10 Asean countries, Brunei, Cambodia, Indonesia, Laos, Malaysia, Myanmar, the Philippines, Singapore, Thailand and Vietnam, including Cambodian band SmallWorld SmallBand and Thai solo singer Gam Wichayanee.

The organizers said they invited a broad variety of musicians who produce their own pop-oriented music.

"It’s a festival to introduce talented singer-songwriter artists or bands who produce their own music,” Hwang Gook-chan, the chief producer of the festival, said during a press event held in Mapo District, western Seoul, on Monday. “K-pop idols are already gaining global attention, but we thought there are so many other artists who deserve the spotlight.”

“Among them, we selected some of the most outstanding artists from different countries,” veteran singer and producer Kim Hyun-chul said. Kim also wrote the campaign song for the festival.

Kim’s English-language song “Will You Come See Me Again?” released on Monday includes the festival’s messages like “all our differences I want to know and learn because that’s what I love about you,” and “no matter how far, it is all right ‘cause talking with you brings home all the time.”

"Round 2020" hopes to not only build closer ties with artists and their fans, but also provide a unique experience for viewers to engage in direct communication with other music lovers from different countries.

Kim compared the festival to a rainbow, saying that each musician will emit different colors.

The festival will be streamed on KBS K-Pop, All That Music and Round YouTube channels from 4 p.m. to 11 p.m. on Sunday.