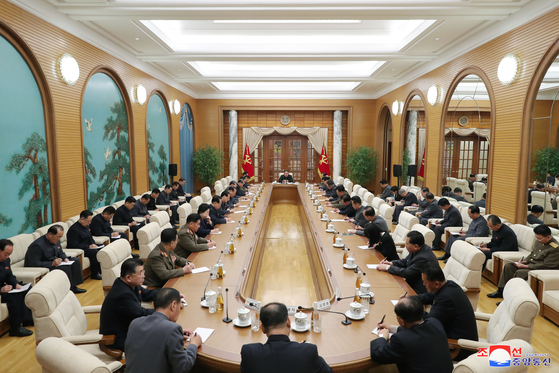 North Korea holds an enlarged meeting of its ruling Workers' Party Political Bureau in Pyongyang on Sunday, with full and alternate members in attendance, in a photograph released by the Korean Central News Agency. During the meeting, economic officials were "harshly criticized," according to the state-run news service. [YONHAP]

With Kim presiding over an enlarged meeting, the ruling Workers' Party Political Bureau on Sunday “harshly criticized the economic guidance organs for failing to provide scientific guidance to fields under their charge under the subjective and objective environment and the prevailing conditions,” according to the official Korean Central News Agency (KCNA) in an English-language report.

The Politburo further condemned officials for “failing to overcome subjectivism and formalism in their work,” while stressing the need to carry out economic plans “on a scientific basis.”

According to the KCNA, Sunday’s meeting was held to organize preparations for the upcoming 8th Party Congress slated for January, an especially rare political event in the country aimed at raising morale and launching a new economic plan to make up for recent failures.

North Korea has apparently managed to avert a health care catastrophe from the pandemic, after it shut down its borders shortly after the Covid-19 crisis began.

But such drastic measures have taken a heavy toll on the regime’s fragile economy, sending trade plummeting and leaving economic goals for the year unmet. Meanwhile, the country has had to struggle with ongoing sanctions and damaging floods and typhoons over the summer.

The harsh criticism leveled at economic officials Sunday testifies to the anxiety gripping the regime’s leadership as the year draws to an end with little to show for the ongoing 80-day “battle” designed to boost production.

The unease may be triggering “irrational responses” from the leader, according to South Korea’s National Intelligence Service (NIS), which reported that Kim ordered the shooting of an influential currency trader in Pyongyang due to a precipitous drop in the exchange rate last month.

A similar Politburo meeting held in mid-November also included harsh criticism leveled at officials who reportedly engaged in “non-socialist” activities at the Pyongyang University of Medicine.

A South Korean government official familiar with the matter said while the details of the reorganization remain unclear, the description provided in the KCNA report hinted they could be related to the party’s Organization and Guidance Department (OGD) and the Propaganda and Agitation Department.

Both departments are believed to be closely related to Kim Jong-un’s younger sister, Kim Yo-jong, who emerged last year as the presumed de facto head of the OGD as well as the regime’s top figure in charge of inter-Korean relations.

Currently serving as the first deputy director of the party’s United Front Department, she was present in state media photographs of the weekend’s enlarged Politburo meeting, where she has sat as an alternate member since being reinstated in April 2020.

Seoul’s NIS said in a parliamentary briefing in early November that the younger Kim was “involved in governance across all levels” in the regime, and that she was likely to be elevated to a full member of the Politburo in line with her de facto standing in next year’s party congress.

The highest decision-making body in North Korea, the Politburo currently has 16 full members and 15 alternate members. Full members usually also carry the title of vice chairman or department director in the party.