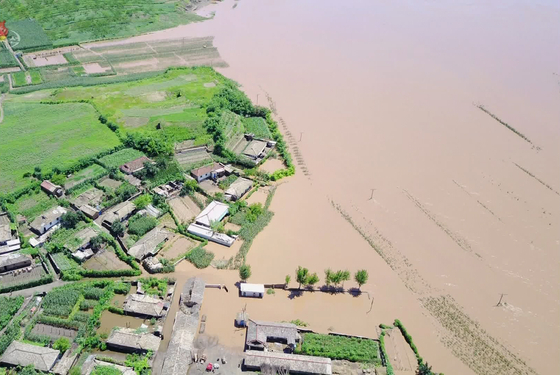 A village in North Hwanghae Province, one of North Korea's most important grain-producing areas, is shown heavily flooded in state media footage from July. The downpours, and the pandemic, aggravated the country's food insecurity this year, but Pyongyang refuses to accept help. [YONHAP]


Seoul’s top inter-Korean agency said Monday it is in negotiations with the World Food Programme (WFP) to be reimbursed for the cost of sending 50,000 tons of rice aid to North Korea which Pyongyang refused to take.

Ministry of Unification spokesman Yoh Sang-key said the government hopes to recover $11.77 million it gave to the WFP to manage the aid project within the year, as no progress has been made due to the North’s lack of response.

The project was conceived last year as a means for Seoul to demonstrate its goodwill toward Pyongyang amid a protracted stalemate in denuclearization negotiations.

The idea was to send 50,000 metric tons of domestically grown rice to the North through the WFP, which would have been the first time in about a decade that a food donation was to be dispatched from South to North.

At the time, the WFP and other United Nations organizations were reporting severe food shortages in the North as a result of weather anomalies in the previous year that damaged the harvest.

But just weeks after Seoul approved the donation in late July 2019, North Korean officials told the WFP they didn't want the rice. No reason was given, though officials in Seoul suspected it was related to South Korea’s joint military exercises with the United States that summer.

According to Yoh, the money recovered from the aborted aid project will be reassigned to the government’s budget for inter-Korean exchange and cooperation projects.

This year, amid the Covid-19 pandemic, North Korea is again facing a major food crisis that is believed to affect around 10 million people — 40 percent of its population, according to UN organizations.

Pyongyang has locked down its borders with China — by far its largest trade partner — over fears of contagion, which has resulted in rising prices for basic commodities and food.

The UN special rapporteur to the country, Tomás Ojea Quintana, said in June that many families “eat only twice a day, or eat only corn, and some are starving,” before urging humanitarian aid to be delivered urgently to the country.

In addition, South Korean experts believe the heavy rains, floods and typhoons that hit the peninsula over the summer took a heavy toll on grain production in the North.

A high-intensity anti-epidemic program carried out nationwide is also believed to have siphoned off the workforce needed to produce grain and fertilizer, Choi Yong-ho, a researcher at the South’s Korea Rural Economic Institute, wrote in a new report.

Choi proposed Seoul should opt for a strategic approach to help the North in its time of need by providing food and fertilizer, and persuade Pyongyang to take the aid through local and private communication channels.

In light of the concerns over food insecurity in the North, a UN Security Council committee approved extending an exemption period for international sanctions on humanitarian assistance and revising guidelines to expedite the delivery of aid to the country, according to the North Korea sanctions committee’s website on Tuesday.