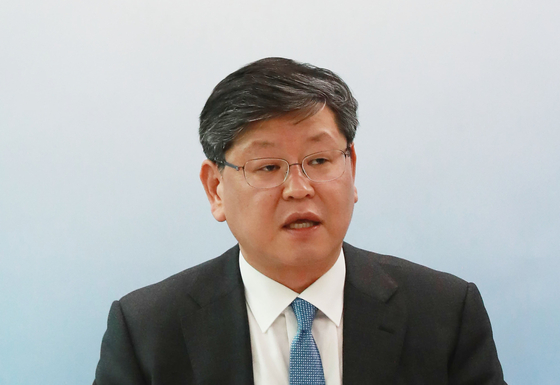 
President Moon Jae-in on Wednesday named a former judge as vice minister of justice, quickly repairing a tear in a disciplinary process against Prosecutor General Yoon Seok-youl, largely seen as his administration’s attempt to dismiss the country’s top prosecutor.

According to Kang, Lee is a former judge with 20 years of experience. “In August 2017, he became the first non-prosecutor to head the Legal Affairs Bureau of the Justice Ministry and served in the post for two years and eight months,” Kang said.

“He is praised for his law expertise and understanding of the general affairs of the ministry, and we expect him to resolve pending issues of the ministry, such as prosecutorial reform, and stabilize the organization.”

Lee will succeed Koh Ki-young, who stepped down Tuesday after a local court granted Yoon’s request for an injunction to temporarily halt Justice Minister Choo Mi-ae’s order to suspend him. On Nov. 24, Choo made the unprecedented move of suspending Yoon and starting a disciplinary process, accusing him of ethical and legal violations.

Koh’s resignation put a serious crimp in Choo’s plan to convene a disciplinary committee and punish Yoon, as he was supposed to chair the process. The ministry on Tuesday postponed the committee's meeting, originally scheduled for Wednesday, to Friday.

Moon wasted no time in naming a reliable ally as vice minister of justice, making sure that the disciplinary committee will take place as scheduled.

Although the law says the minister of justice is supposed to chair the disciplinary committee, Choo can't do so because she is the petitioner behind the process. Lee will chair the committee on Friday.

Lee served three justice ministers of the Moon administration — Park Sang-ki, Cho Kuk and Choo — while heading the Legal Affairs Bureau of the Justice Minister since August 2017. When Choo was the nominee, he headed her confirmation hearing preparation team.

At the ministry, Lee also headed the preparation team to launch the Corruption Investigation Office for High-ranking Officials. The office, promoted by the ruling party and the administration, is the first state organization permitted to take over some powers of the prosecution.

He served as a judge from 1994 till 2013 and a key member of the Society for Research on Our Law, a group of liberal judges.

Lee joined a law firm in 2013. During the impeachment trial of President Park Geun-hye in 2017, Lee represented the National Assembly, the petitioner.

Meanwhile, the Justice Ministry rejected Yoon’s request to know the identities of the members on the disciplinary committee other than the minister and the vice minister. According to Lee Wan-kyu, a lawyer representing Yoon, the ministry refused to share the identities to protect their privacy.

The ruling party and Justice Minister Choo have been pressuring Yoon to step down. The president has no power to fire him. Moon named Yoon prosecutor general in July 2019, but Yoon’s relations with the administration quickly turned sour as he ordered probes into key allies of the president such as former Justice Minister Cho Kuk.

The disciplinary committee is the only way to legally dismiss Yoon, whose two-year tenure is guaranteed by law. Moon is expected to uphold the decision of the committee.

According to the Prosecutors’ Office Act, the prosecutor general’s tenure is stipulated as two years. Unless he is impeached or criminally convicted and imprisoned, the tenure is guaranteed. Dismissal requires a disciplinary process.

Article 23 of the Act on Discipline of Prosecutors also says the president shall execute dismissal, removal, suspension from office, or salary reduction, of a prosecutor, upon the recommendation of the minister of justice.

“If Choo recommends the disciplinary committee’s decision to Moon, he will have to approve it and execute it,” a presidential aide said Wednesday.