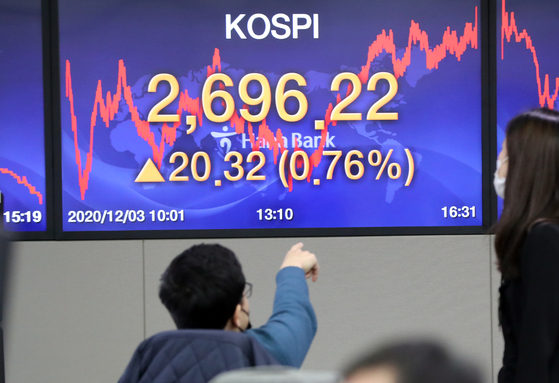 The trading board at the headquarters of Hana Bank in central Seoul shows the Kospi's record-high close at 2,696.22 on Thursday. [YONHAP]

Samsung Electronics hit an all-time high during trading as a better-than-expected chip exports record for November and sanguine prospects for next year’s chip business made investors bullish.

The market bellwether briefly traded at 70,500 won, an all-time high in the morning session, before closing at 69,700 won, up 0.29 percent compared to the previous trading day.

Korea’s exports of semiconductors increased 16.4 percent in November over a year ago to record $8.59 billion, according to the Industry Ministry on Wednesday.

The upbeat result is attributed to larger-than-expected shipments of processing chips for PCs and smartphones.
The momentum will likely build up through next year as shown in U.S. chipmaker Micron’s confidence in revising up its earnings guidance for the fiscal first quarter earlier this month.

“A robust increase in demand for dynamic random-access memory [DRAM] will occur at the end of this year and through early next year as Chinese smartphone manufacturers Xiaomi, Oppo and Vivo will move faster than expected to stack up their chip inventory,” said Pak Yu-ak, an analyst at Kiwoom Securities.

The trio of manufacturers is ramping up smartphone production, with expectations that they could benefit from the weak standing by local competitor Huawei that is struggling from U.S. trade restriction.

The growing demand for PCs and online content consumption in the pandemic era would all contribute to brightening the sales outlook for chips.

Bond prices, which move inversely to yields, closed higher. The yield on three-year Treasuries lost 0.7 basis points to 0.975 percent, and the return on the benchmark five-year government bond fell 1.3 basis points to 1.337 percent.